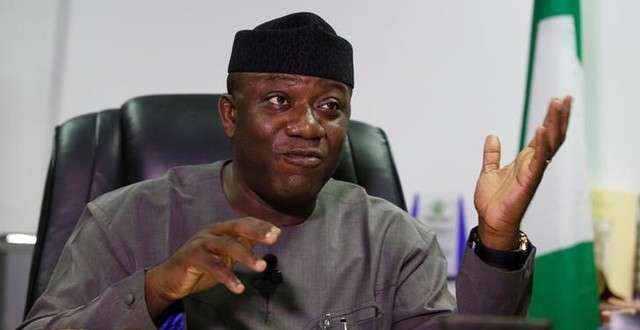 I’m Not On A Revenge Mission – Fayemi

The newly sworn-in governor, Kayode Fayemi, has said that he is not on a revenge mission in the state.
This was stated on the Government of Ekiti State verified Twitter handle, @EkitiStategov, on Tuesday October 16, 2018, just as he was being sworn in.
He also said that the details of the finance in the state would be made public within his first 100 days in office.
Gov. Kayode Fayemi signs the oath of office before the state Chief Judge, Justice Ayodeji Daramola, [/caption]The tweet read, “The Ekiti State Governor, Dr. John Kayode Fayemi has promised to make public within his first 100 days in office the state of finance of Ekiti State. He promises no media trial and witch-hunting as he is not on a revenge mission.”
Fayemi has said that his administration would focus on four areas, which include agriculture and rural development, social development, infrastructure and industrial development; and entrenching the economy.
President Muhammadu Buhari was represented at the event by the Secretary to the Government of the Federation, Boss Mustapha.
Also present were the Governors of Lagos, Akinwunmi Ambode, Kaduna, Nasir El-Rufai; Oyo, Abiola Ajimobi; Kebbi, Atiku Bagudu, Ondo, Rotimi Akeredolu and many others.
Dr John Kayode Fayemi was sworn-in as the sixth Governor of Ekiti, by the state Chief Judge, Justice Ayodeji Daramola, who administered the Oath of Office on Fayemi on Tuesday, October 16, 2018 in Ado-Ekiti.
The 53-year-old governor is a native of Isan-Ekiti in Oye Local Government of Ekiti State. He was defeated by Mr Ayodele Fayose in 2014.
Governor Fayemi, a former Minister of Mines and Steel, was elected on the platform of the All Progressives Congress (APC) with 197,459 votes, against his closest opponent, Prof. Kolapo Olusola of the Peoples Democratic Party (PDP) who scored 178,121 votes.
He will serve for only four years, having been governor of the state between 2010 and 2014 under the platform of the defunct Action Congress of Nigeria (ACN).
I’m Not On A Revenge Mission - Fayemi# 2018-10-17
Idowu Hamed

Tags I’m Not On A Revenge Mission - Fayemi#