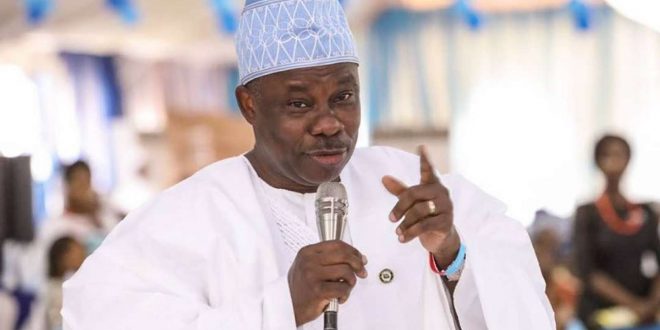 Governor Ibikunle Amosun of Ogun state says he will talk more on politics, the 2019 governorship election, as well as other elections in the state, after he leaves office as Governor on May 29.

Amosun who made this known during a Press Conference on the 2019 African Drum Festival, at the MITROS Residence hall, Ibara, Abeokuta, the Ogun state capital said that he is being cautious while talking about politics and the elections because he is still the Governor of the state.

He added that he will feel free to talk more about political issues in the state beginning from May 29, when he would have handed over to another Governor.

Speaking on the festival itself, the Governor said that the state government will commission the Ransome Kuti Family Museum at Imo, Abeokuta during the festival.

Amosun said 26 cultural troupes from different states in Nigeria are expected at the event.

He added that 71 independent troupes from the country and 27 troupes from the United States, China, Trinidad and Tobago, Belgium, Germany, France and some African countries will grace the event.

The Governor said that a rail ride from Iju-Ishaga to Abeokuta which will be led by Nobel Laureate Prof. Wole Soyinka will also be part of the festival.

He noted that a special tribute will be paid to the late music legend Fela Anikulapo Kuti during the festival, while his son Seun Kuti will perform at the last day of the festival.