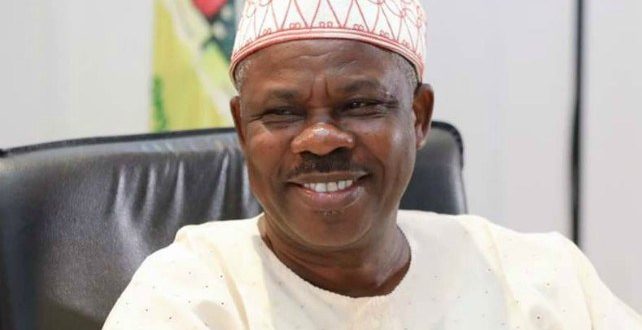 Outgoing Governor Ibikunle Amosun on Tuesday Apr 16, 2019 said he would hands off governance of Ogun state by 12 midnight on May 28, 2019 with the inauguration of projects executed by his administration.

Amosun added that he would also continue to work assiduously to deliver on his campaign promises till the last minute in office, reiterating that all projects started by his administration would be completed.

The governor made this known in Abeokuta, the Ogun State capital, at a world press conference jointly addressed by him and his Deputy, Chief (Mrs.) Yetunde Onanuga, ahead of the 2019 edition of the African Drum Festival.

He said this Drum Festival with the theme “Drumming for the Future,” is expected to be bigger and better, in terms of participation, cultural education and expose.

The governor disclosed that the Festival would take place at the newly completed 10,000-seater capacity Amphitheater at the Abeokuta Central Business District (ACBD), Abeokuta.

Amosun said: “My administration will work to deliver projects to our people till the last moment I hand over to the next governor. I will work every hour, every minute and every second till 12 midnight of May 28.

“The last two weeks of our administration will be about delivery of dividends of democracy to the people. In fact, we will continue to lay asphalt on roads till the last minute of my government.

“This is because I have vowed to uphold the oath I swore to, that I would work to deliver on my electioneering promises to the people of Ogun State.”

According to Amosun, the festival, was conceptualised four years ago by the Ogun State Ministry of Culture and Tourism, and has since become a state affair to celebrate African Heritage and culture.

Earlier, Deputy Governor Yetunde Onanuga who doubles as the chairman of the Local Organising Committee of the festival said it is a legacy the state government has bequeathed to Ogun, Nigeria, Africa and the world.

While noting that the festival has been expanded to accommodate more activities, she disclosed that at least 28 state troupes, 27 countries and 71 Independent troupes have signified their readiness to participate in the festival billed to hold between April 25 and 27.

Mrs Onanuga  said the Ransom Kuti  Memorial Museum would be  inaugurated during the festival in honour of late Afrobeat King, Fela Anikulapo Kuti, during which his son; Seun Kuti, would perform at the occasion.

She added that Adire Logo would also be unveiled at Itoku Adire Market while art and cultural train ride to be led by Prof. Wole Soyinka, from Iju train station in Lagos to Laderin in Abeokuta will be organised.

According to her, African Drum Festival has become a rallying point for Africans within the continent and in the diaspora to showcase and celebrate their common heritage.