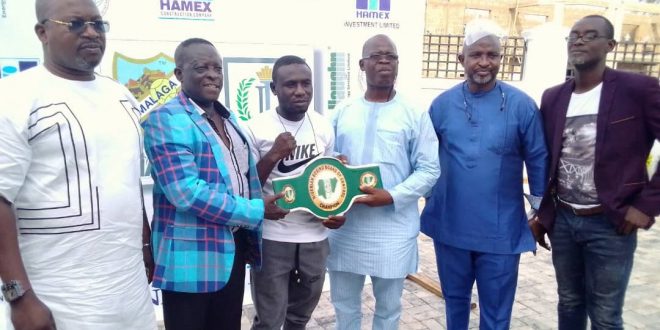 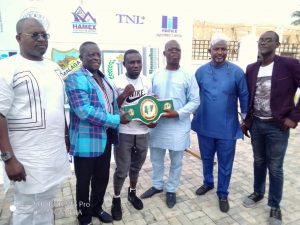 IBADAN – The Chairman and CEO of the prestigious Ilaji Sports and Resort Ibadan, Engr. Dotun Sanusi has given a nod to the hosting of the historic World Boxing Federation (WBF) International Super Featherweight Title bout between Ridwan Oyekola (Nigeria) and Jose Ramos Savin (Spain) slated for December 27, 2020.

The organizer and philanthropist who just celebrated his 52th birthday endorsed the epic bout and pronounced his support for the boxing show while launching Ilaji Soccer Academy incollaboration with Malaga CF during the week.

According to Engr Sanusi in his remarks after a brief meeting held at the lounge of Ilaji Resort charged the Ibadan-born boxer, Oyekola who’s fondly called “Scorpion” to do the nation proud by ensuring a victory against the Spanish opponent while also promising to support his preparation towards the big fight.

Reacting to the good gesture of Engr Sanusi, the President of Nigeria Boxing Board of Control (NBBofC), Dr. Rafiu Ladipo thanked the CEO of Ilaji Resort for supporting the World title bout which will definitely bring another honour to Ibadan.

In his words, “Another history is about to be made in Ibadan, as the World Boxing Federation (WBF) has officially approved an International Super Featherweight Title bout between our own Ridwan Oyekola (Nigeria) and Jose Ramos Savin (Spain) by the President World Boxing Federation Howard Goldberg. We need huge money to execute this bout and Engr Sanusi has just come to our aid.

He continued, “We are going to ensure a good preparation for Oyekola so he could do the nation proud and on the part of NBBofC, we’re calling to other corporate bodies and Oyo State government for support for this bout as there are many other logistical needs to make the event an itch-free”.

Other members of the planning committee that attended the meeting include the Secretary of NBBofC – Remi Aboderin, the CEO of Core Afrique Boxing Promo’FCtion, who is promoting the fight, Sola Ayodele, aka Sola Ford, the Chairman of Oyo State chapter of NBBofC – Hon. Gbenga Opaleye and Olanrewaju Agiri, a journalist and Chief Operation officer (COO) of the Golden Gloves Boxing Promotion.

The event has also been confirmed by a Spanish media ‘Solid Shock Press’ that wrote on its website: “Confirmed the fight of our boxer José Ramos Savin vs Ridwan Oyekola next December 27, 2020.

“The Spanish fighter will travel to the African continent for the Intercontinental Super Pluma and World Boxing Federation (WBF), specifically in Ibadan, Nigeria, where Oyekola is a native,”” the organiser said.