Breaking News
Home / ENTERTAINMENT / If You Shed Tears At My Burial, My Spirit Will Flog You – Charles Olumo 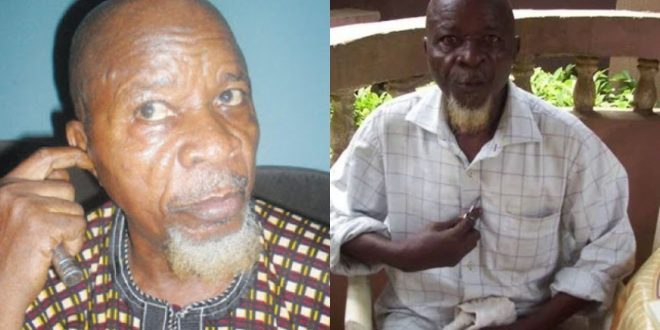 If You Shed Tears At My Burial, My Spirit Will Flog You – Charles Olumo

Idowu Hamed July 20, 2019 ENTERTAINMENT, HEADLINE Comments Off on If You Shed Tears At My Burial, My Spirit Will Flog You – Charles Olumo 107 Views

Abdulsalam Ishola Sanyaolu, veteran Nollywood actor, popularly known as Charles Olumo ‘Agbako’ in the Yoruba movie industry has been down with a strange ailment that rendered him incapacitated and made him disappear from the scene for some time.

The 94-year-old thespian who is now back on his feet granted an interview recently where he said:

“I have told them, and I’m also using this opportunity to inform them, that nobody should come and shed crocodile tears at my burial. If they do, my spirit will flog them, because when I needed their help, they were nowhere to be found’.

“I have been sick but thank God I’m back on my feet. My ailment was heart-related and after series of test, I was told that my heart was weak, coupled with the fact that I often forgot things, so I was placed on drugs that must be used to avoid any crisis’.

When asked if he underwent any surgery, he said: “no, the doctors said there was no way they could perform surgery on me. They said the drugs were very essential and must not be skipped. Though, I was operated upon when I had urinary ailment recently, I’m free from that now”.

Publisher and Editor in Chief - Magazine and Online Tel: 08038525526 - 08023339764 - 08055657329 Email: startrendinter@gmail.com
Previous Sanwo-Olu At War With Party Members On Cabinet List, Alleged Some Nominees Have No Voter’s Card
Next How Two Teenagers Allegedly Disfigured And Murdered Their Friend Because ‘She Was Too Attractive’