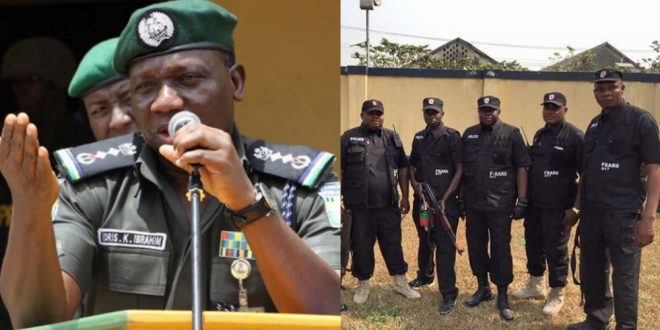 Idowu Hamed September 6, 2018 NEWS Comments Off on If You Detain Suspect Beyond 48 Hours You Can Lose Your Job – IGP Warns FSARS 109 Views

The Inspector General of Police, IGP Ibrahim Idris has warned operatives of the Federal Special Anti Robbery Square (FSARS) to refrain from detaining suspects for more than 48hours without arraigning them in court.
The IGP warned that operatives who detained suspects illegally for more than 48 hours are at the risk of being dismissed from the force.
IGP Idris read the riot act at the Anambra State Police Command Headquarters, Amawbia during a lecture to officers of FSARS.
Represented by the National Coordinator X-Squad, Amaechi Elumelu, a Deputy Commissioner Of Police, the IGP said the FSARS was created to handle armed robbery and kidnapping cases alone.
He said: “You are created and authorised to handle only armed robbery and kidnapping cases. Operatives of FSARS are to be trained and retrained regularly to equip them with modern working knowledge and skills to perform optimally in line with international best practices.
“You’re barred from searching handsets and laptops of innocent citizens, unless the search is directly linked to a case or directed by IGP or any person or persons he so delegated. You’re prohibited from detaining any suspect beyond what the law says without recourse to the court.”
It was earlier reported in the media that the National Human Rights Commission (NHRC) has reportedly inaugurated a seven-man Special Investigative Panel to look into the activities of the Special Anti-Robbery Squad of the Nigeria Police and make recommendations for its reform.
A statement on Tuesday, September 4, 2018 by the commission in Abuja said the investigative panel was inaugurated in line with a presidential directive.