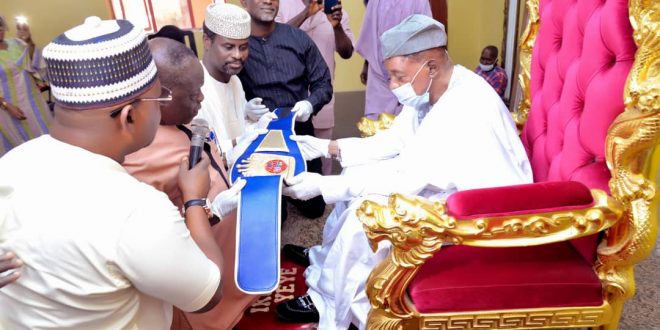 Oyekola is facing an Argentine boxer, Lucas Matias Montesino on December 27, 2020 at Ilaji Hotels and Sports Resort, Ibadan for the vacant belt.

Alaafin who disclosed this recently in his palace while hosting the Local Organising Committee (LOC) led by Sir Olawale Okonniyi for the epic bout and receiving the belt, expressed joy that the history is rewriting itself again in Oyo State after 57 years.

Oba Adeyemi before giving the Ibadan born boxer a royal blessing recalled his winning mentality during his youth’s days as a young boxer in Ebutte-Metta area Lagos and shared some boxing techniques that could enhance victory with the Scorpion.

“Boxing is spiritual, only those who are engaged in the ring can understand that. Footwork was my strength in my boxing days and it had helped me against most of my opponents. You will need to keep your feet apart as you move to maintain good balance, and move round the ring using short sliding steps on the balls of your feet while you always ensure to move the foot closest to the direction in which you want to move first”, Alaafin explained to Scorpion.

The Monarch however offered prayers to the boxer and charged the LOC to ensure the image of the nation is portrayed in a very shining light considering how the fight will attract global attention while promising to be at the ringside during the fight to cheer Scorpion to victory. The president of the Nigeria Boxing Board of Control, (NBBofC), Dr Rafiu Ladipo in his address assured the monarch of an itch-free and high standard bout coming on December 27, 2020 taking into cognizance the lofty sporting facilities provided by the management of Ilaji Resort that is hosting the event.

Other members of the LOC that visited Alaafin’s palace for royal blessing include Olusola Ayodele, the CEO of Core Afrique Boxing Promotion and the promoter of the fight, Hon. Gbenga Opaleye, the Chairman of Oyo NBBofC and his vice, Ms Edna Ayegbeni, Ademolu Okuneye, the head of Media.