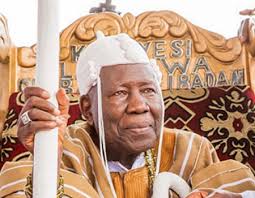 There appears to be a crack within the rank of the new kings promoted by the immediate past governor of Oyo State, Abiola Ajimobi as a majority of them again boycotted the reconciliation meeting held at the Popoyemoja Palace of the Olubadan of Ibadan, Oba Saliu Adetunji, recently.

The meeting, which was adjourned the penultimate week, was fixed for Monday August 19, 2019 to further strengthen the process that would bring the feuding sides together.

The Olubadan and a former governor in the state, Senator Rashidi Ladoja are not comfortable with the process leading to the promotion of the kings while about eight promoted kings in the Olubadan in council commended the government for giving Ibadan its deserved dignity.

Oba Kola-Daisi was said to have given a tenable excuse why he could not attend the meeting.

Even though Oba Balogun, who is next in the hierarchy to Olubadan, is the leader of the promoted kings, his colleagues have taken exception to the process adopted by him towards resolving the crisis.

In another development, one of the new monarchs, Oba Olakulehin while speaking with the media said they did not attend because of some unresolved issues.

Olakulehin, who spoke on behalf of others, argued that there are four vacancies in the Balogun line which should have been filled for a long time but they refused to fill the vacancies.

Oba Olakulehin said: “We couldn’t have been there because there are issues they are yet to resolve. In Balogun line, there are four vacancies to be filled. But, instead of filling those vacancies, they enthroned a new Iyalode in a parlour without our consent.

“They sent a letter to us that they wanted to fill the vacancy in the Iyalode line. What about Balogun line? That’s why we did not attend the meeting.”

Meanwhile, the new kings had said earlier that the day fixed for the second peace meeting was not feasible owing to Eid-el-Kabir ceremony.

They said, whatever conditions attached to the peace move must not include removal of their crowns and titles of kings conferred on them legitimately.