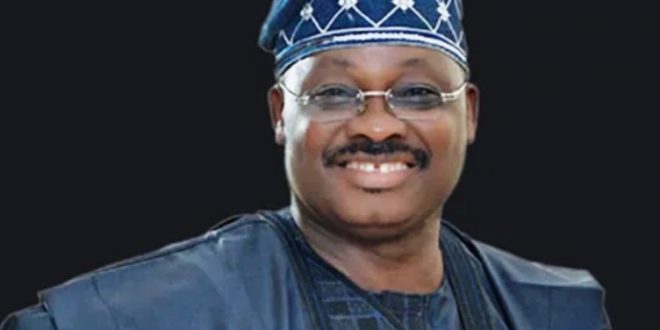 IBADAN: Though his multiple lovers and kinsmen were not allowed to witness his burial as expected, but they in their respective places of abode followed the burial ceremony through the radio and television stations as remains of the immediate past governor of Oyo State, Senator Abiola Ajimobi, were committed to mother earth at 10..05am, on Sunday, June 28, 2020, according to Islamic rites.

The late politician, aged 70, reportedly buried in strict compliance with the the COVID-19 protocols, with less than 20 people in attendance, was confirmed dead at a private hospital in Lagos, on Thursday, June 25, 2020.

It was scooped that not less than 20 people, including wife of the former governor, Chief Florence Ajimobi, and other members of his immediate family, were in attendance.

Recalls, the Agodi GRA, which was the preferred choice by the family, was not approved by the Oyo State Government on the ground that there is litigation on the property. The government however granted the family waiver to bury him at his residence.

A special prayer was later said for the repose of his soul at the Ishaq Abiola Ajimobi Central Mosque, Oke-Ado, Ibadan, on the afternoon of Sunday, June 28, 2020.

May Allah grant him eternal rest and Aljanna Fridays.