Breaking News
Home / HEADLINE / I Am Not Holding Church Services, My Neighbour Only Wants To Implicate Me, Ogun Pastor Insists 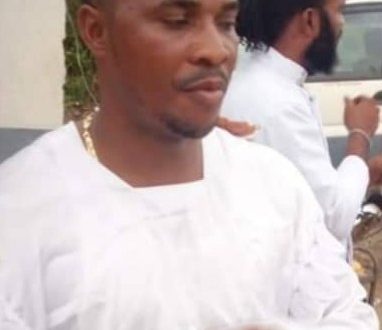 Elijah Amos of the Celestial Church of Christ (a.k.a Isiah 43 vs 3 Cathedral)

I Am Not Holding Church Services, My Neighbour Only Wants To Implicate Me, Ogun Pastor Insists

Idowu Hamed April 30, 2020 HEADLINE, NEWS, RELIGION Comments Off on I Am Not Holding Church Services, My Neighbour Only Wants To Implicate Me, Ogun Pastor Insists 123 Views

ABEOKUTA: A clergy in Ogun state, Elijah Amos of the Celestial Church of Christ (a.k.a Isiah 43 vs 3 Cathedral) have sought for justice over allegation by his neighbour that he has been holding Church services despite the lockdown directive and threat to destroy his Church.

This came, following a recent report on the social media by the Pastor’s neighbour (name undisclosed), who lives close to the Church, alleging that the Church had been holding services every Sunday despite government’s lockdown and social distancing directives.

The report which went viral prompted the State’s Police Command to deploy its operative in company of the COVID-19 Task Force and some Journalists to the area on Sunday, April 26, 2020 at 10:45am to confirm the allegation. The pastor was promptly arrested alongside his disciples and was later released.

But Elijah who live in the Church situated in Asero Estate, Abeokuta with some of his disciples in an interview with Journalists debunked the allegation, insisting that since the inception of the lockdown, he had directed his members to worship at home until government lifts the ban.

He further explained that the allegation could not be unconnected to the fact that his neighbour had always complain that he doesn’t want to see any white garment Church in the vicinity, recalling that he (the neighbour) had threatened to do anything possible to send the Church out of the area.

His words, “A Church member called me and said he saw something on Facebook that the neighbour living behind my Church said he would expose the Church to the world that we are holding services. The DPO of Obantoko came around 7:30pm on Sunday, looking around to see if we were holding service.

“He told me that someone just informed the Ogun State Commissioner of Police that there was service going on. When he found out there was nothing going on, he left.

“The following morning, around 6:30am I saw two men hanging around my fence, on interrogation they confessed to be Journalists, saying they were sent by a friend to spy on me”

Some residents of the area who spoke on condition of anonymity also stressed that the Church, since the lockdown order had not held any service.

When contacted the District Police Officer (DPO) of Obantoko Police Division, Abeokuta, Mr. Beyioku Kehinde who earlier went to the area on Saturday April 26 at 7pm for investigation, confirmed that he visited the Church several times for investigation, but there were no services held as alleged by the Pastor’s neighbour.

The DPO added that he was also at the Church on the morning of Sunday, April 26, 2020 for another investigation, but there was no worship session going on in the church.

According to him, after the investigation, he (DPO) visited the neighbour who leveled the allegation against the Pastor, and he told him that there was no reason for Church to be in that area.

He said, “The first time I went there I only met the Pastor and his family members, no Church service was going on. On the said Sunday again, I went there and nothing of such was going on. When I interviewed the man (the neighbour), he said that the Church was not supposed to be there, but I told him that was not my business.”

The DPO added, “It’s like there’s an unsettled dispute between the two neighbours. Based on what the man complained we did not find the Pastor guilty. All I discovered was that the man was only trying to implicate the Pastor”.