Breaking News
Home / HEADLINE / I AGREE WITH THE PRESIDENT THAT FIRST LADY AISHA IS A WORTHY PARTNER, BEACON OF GOOD THINGS FROM OUR ADMINISTRATION – OSINBAJO 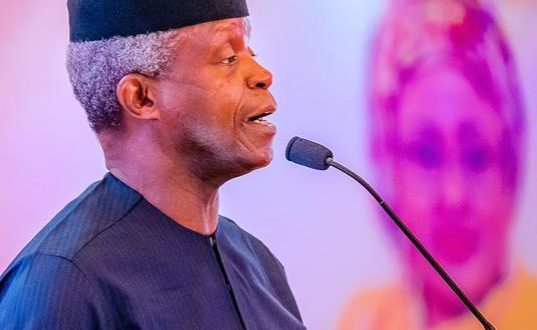 Vice President Yemi Osinbajo SAN attends the book launch on The Making of the Nigerian Flagship, A story of The Guardian at the Federal Palace Hotel in Ikoyi, Lagos State. 8th April, 2021. Photos; Tolani Alli.

I AGREE WITH THE PRESIDENT THAT FIRST LADY AISHA IS A WORTHY PARTNER, BEACON OF GOOD THINGS FROM OUR ADMINISTRATION – OSINBAJO

Idowu Hamed April 10, 2021 HEADLINE, NEWS Comments Off on I AGREE WITH THE PRESIDENT THAT FIRST LADY AISHA IS A WORTHY PARTNER, BEACON OF GOOD THINGS FROM OUR ADMINISTRATION – OSINBAJO    21 Views 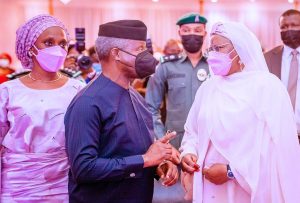 ABUJA – Beyond her customary role as the First Lady, Aisha Buhari has continued to be a worthy partner and an inspiration for several good initiatives that Nigerians have come to identify with the administration of President Muhammadu Buhari.

According to a release e-signed and made available to StarTrend Int’l & online – www.startrendinternational.com by Laolu Akande, Senior Special Assistant to the President on Media & Publicity, Office of the Vice President, Osinbajo stated this This was stated this on Thursday, April 8, 2021 during the public presentation of a book on the First Lady, titled: “Aisha Buhari: Being Different,” which held at the State House Banquet Hall, Abuja.

According to the VP, the book on the First Lady was not just an important addition to the literary canon on public life and Nigerian biographical history, it was a window into the credible efforts of the First Lady in empowering Nigerians.

Quoting the words he directly attributed to President Buhari, the VP noted that, “Aisha, as the world has come to know her, is kind-hearted; this made her transition to philanthropy and humanitarianism easy. When she became First Lady, her protective mien was exerted when women, children, and other vulnerable people are abused. 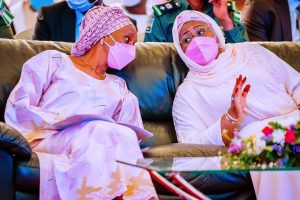 Still quoting the President directly, the VP continued: ” I have observed with keen interest, as she addresses many of the social concerns that have given her sleepless nights. She has, therefore, been a worthy partner and a beacon for some of the good things that Nigerians have come to identify with our government.” I concur, I agree.”

Speaking personally, the Vice President stated that, “with her views forthright, crisp, truthful and every once in a while, controversial, she has established an ongoing conversation with the Nigerian people on the issues that concern them most, issues that concern us the most: good governance, security, putting food on the table, education of our children, prompt payment of pensions to army veterans, and drug abuse, violation and victimization of women.

“She airs her own personal struggles, her annoyance, in a manner probably unprecedented in the role of First Lady anywhere. 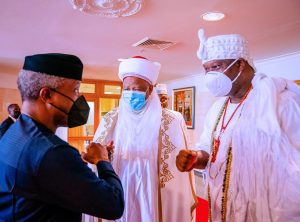 According to the Vice President, the book was a “detailed and sensitive chronicle of her childhood years and her growth as a woman, wife and mother.”

He added that it “it also highlights her evolution from a silent supporter of her husband’s political adventures to an active mobilizer and campaigner that played a major role in selling him to the Nigerian electorate.  Then we also read in the book, how as First Lady, she founded the “Future Assured” initiative, promoting the welfare of women, youth and children, driven by the Aisha Buhari Foundation.”

Then the VP highlighted the influence of the First Lady’s role as a doting wife, mother and advocate for girl child education, as well as the impact of her Future Assured initiative, which he stated was inspired by the First Lady’s “conviction that empowering women is a direct way of promoting the economic and social progress of a nation.”

He said, “we are also given a good picture of this steadfast advocate of women’s health issues, who has championed improved access to healthcare for women, especially in respect of maternal health with the aim of reducing maternal mortality, particularly in rural communities. 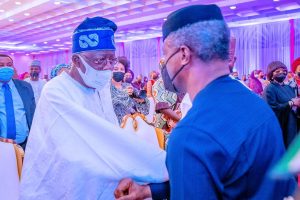 “We understand the roots of her relentless pursuit in these past years of the empowerment of women, especially through education, the need for young girls to get primary and secondary school education before getting married. We understand her stand that no girl should get married before the age of 17. It is from her own experience being married at 19, and her single-mindedness and determination in ensuring that her educational pursuits were not aborted by her obligations as a wife and mother.

“We also get a glimpse of the role she considers primary, being “Mum-in-Chief” to Halima, Yusuf, Zara, Hanan, Chuchu, and now many grandchildren. Her personal attention to the lives of each of her children, and her fierce protection of their privacy and individuality is a lesson in bringing up children under the scrutiny of a sometimes mischievous social media.”

Speaking further, the Vice President commended the author, the Senior Special Assistant to the President on Administration and Women Affairs, Dr. Hajo Sanni, for writing “a most engaging book on an incredibly fascinating person, Her Excellency Aisha Buhari, Nigeria’s First Lady, and seeking “to document the practical work she has done in the past five years.” 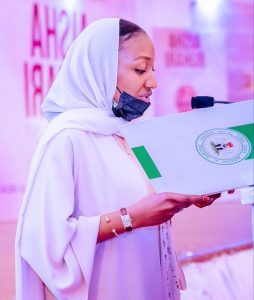 He said, “it is unlikely that any First Lady in Nigeria’s history has in a few years captured the imagination of Nigerians as profoundly as Aisha Buhari. She is, of course, the first First Lady to be on Twitter, Instagram, and other social media platforms, getting her unfiltered views across to the Nigerian people and she’s probably the first to receive in real-time, the opinions of Nigerians on her views.”

According to the VP, the book on the First Lady has etched her name and the impact of her good works on the sands of history.

He said, “perhaps because of the undefined nature of their positions, it was (former US First Lady) Michelle Obama who famously said that there is no handbook on how to be a First Lady, and the sometimes uncertain impact of their roles on the affairs of state, First Ladies quickly fade into obscurity when the curtains of time are drawn on the tenure of the administration of their husbands.

“But it is unlikely that Aisha Buhari would ever be forgotten and even if there was a chance of this happening, this well written attempt to document her life, times and contributions as First Lady to national life through the causes that she has taken up, removes that possibility.” 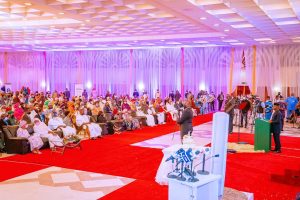 Besides the First Lady herself, dignitaries present at the event chaired by the National Leader of the All Progressives Congress, Asiwaju Bola Tinubu, include the wife of the Vice President, Mrs. Dolapo Osinbajo; former First Lady, Dame Patience Jonathan; wife of former Vice President, Amina Sambo; the Ooni of Ile-Ife, Oba Adeyeye Enitan Ogunwusi; the Sultan of Sokoto, His Eminence, Sa’ad Abubakar III; Chairman of Nigeria Governors Forum and Governor of Ekiti State, Dr. Kayode Fayemi; the Chief of Staff to the President, Prof. Ibrahim Gambari; Minister of Women Affairs, Dame Pauline Tallen; and a number of federal cabinet members; the Head of the Civil Service of the Federation, Folasade Yemi-Esan, who represented the Secretary to the Government of the Federation; wives of State Governors, among other senior government officials. 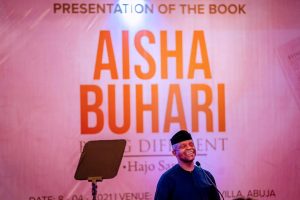 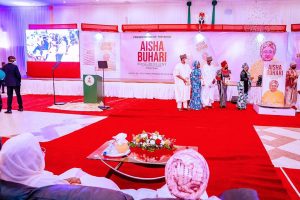