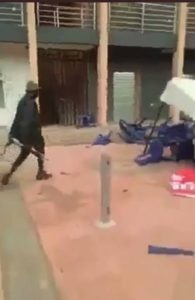 According to a video clip that went viral recently, the gunmen were heard saying, “we’re doing what we’re supposed to do.”

The gunmen were reportedly announced their arrival to the scene with gunshots everywhere while they documented their devastation and havoc, claiming that their mission was to prevent the 2023 elections from taking place in their so-called Biafra land.

The attack, it was learnt, left no fewer than 17 persons injured.

The incident occurred at Awgu Town, Awgu LGA of Enugu State around 6pm on Sunday.

According to eyewitnesses, many people were wounded as the gunmen opened gunfire on the unsuspecting party members.

“They came to the venue of the meeting in two buses and just when we were about to close the meeting, they started shooting into the air.

“While those who had guns were shooting into the air, others who had clubs and machetes, descended on us and wounded many people,” a source told The Nation.

It was reported that one member, who entered her car to answer a phone call, escaped death miraculously as they shot directly at her car.

Observers of the scene described it as a sad development for Nigeria and a setback for the LP presidential candidate, Peter Obi, whose supposed stronghold is the South East.

They were of the opinion that the people of South East have given these faceless gunmen too much leeway to operate, and now it appears they are coming after their people with full 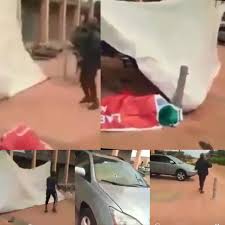 force, all in the name of realising their dream of Biafra state.

The observers also noted that, these gunmen seem to gradually destroying their states’ economy, with a view to cripple their sole presidential candidate in the coming elections.