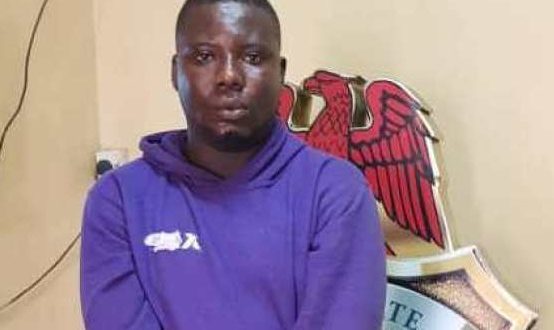 An alleged notorious phone dealer, Yusuph Da-Silva, 28, popularly called ‘Da-Gold’, in Computer Village, Ikeja and Ifako Ijaiye area of Lagos, who specialized in buying mobile phones from armed robbers, cultists and pickpockets operating in Ogun and Lagos State has disclosed that he buys over 30 phones a week and made between N25, 000 and N30, 000 daily from buying and selling robbed phones.

After almost three months of relentless hunt, the suspect was recently arrested by the Decoy Team of the Lagos State Rapid Response Squad (RRS) over a robbery incident around Ifako-Ijaiye, where mobile phones, laptops and other valuables were carted away at gun point.

The phone dealer, Da-Silva, had been on the run after police began a crackdown on the robbery gangs supplying him mobile phones.

Da-Silva also confessed to have maintained links with three-armed robbery gangs who constantly supplied him with stolen phones and other valuables after their operations.

The first gang allegedly consists of Abiodun Tajudeen (a.k.a Shalori) Drey, and Moshood Akinwande (a.k.a Orobo) who rob with a bike. The second gang, AY and his cohort; and the third gang is led by ‘Idaso’ and his boys.

They are all notorious armed robbery gangs that specialize in robbing people at gun point around Fagba, Iju-Ishaga, Oke-Aro and Ifako areas.

Da-Silva sold the phones in Computer Village, Ikeja and shipped some to Kwara, Osun and Oyo States to make tracking of the stolen phones difficult for security operatives to retrieve if investigated.

It was scooped that Abiodun Tajudeen (a.k.a. Shalori) and Moshood Akinwande (a.k.a. Orobo), had sold some phones and other valuables to Da-Gold early this year which is the cause of his present arrest.

Investigations by the police revealed that both Tajudeen and Akinwande are presently in police custody over different robbery cases.

Also in his confessional statement, Da-Silva said, “police crack team in Magbon arrested AY’s gang who linked me as the receiver of all their stolen phones and I was arrested. The Police later recovered about seven smart phones from me.”

After the Magbon arrest, “I resulted to wearing hoodie sweatshirts” which I use to disguise to avoid security agents from identifying him as many more investigations has turned its search light on the Ikeja computer Village ‘Big Boy.”

“I have different colours and designs of the hoodie sweatshirt and I often avoid some areas to avoid getting arrested while I continue my business.”

Sources disclosed that Da-Silva stayed in Fagba Railway Line where he bought the robbed mobile phones before ferrying them to Computer Village, Ikeja, to sell them to retailers anxiously waiting for him.

It was gathered that many of the retailers preferred to meet him first so that they can buy some of the best phones from him.

It was also revealed that Da-Silva is dreaded in Fagba thereby making it difficult for community members to co-operate with the police.

He continued, “I deal in smart phones. I have been a phone technician in Computer Village, Ikeja, since 2012. When I realized that wasn’t yielding enough money, I developed links with network of boys on the streets that gave me steady supply of phones. I wipe or flash them before selling them. I don’t collect their SIMS.

“They bring them to me daily. I get up to six or seven smart phones from them on daily basis and I sell to my customers in Computer Village.”

He added, “the sales from those phones fetched me between N25, 000 to N30,000 daily. I don’t bother to ask them about how they get the phones because they have told me they were gotten through ‘Stop and Search’, (meaning they robbed their owners to get them).

“I am not a robber. Face to face, they would confirm to you. I bought the phones from them. I have never followed them to rob. What I do before is internet fraud before I started buying stolen phones from these guys.”

The suspect, according to sources in Ifako-Ijaiye had remained evasive since he was arrested by the police in Ogun State. The sources added that he has strings of criminals he is well connected to in Orile-Iju, where his family house is located.

“His business in that area escalated robbery and cultism around Ifako-Ijaiye because he created a ready market for their loot. He is their Godfather”, the source added.

It was also disclosed that the suspect relocated to Ijoko, Ogun State when he realized police were on his trail and he sneaked into Lagos in hooded sweater to avoid being detected.

According to the Police Public Relations Officer, DSP Bala Elkana, the suspect has been transferred to SARS for further investigations.