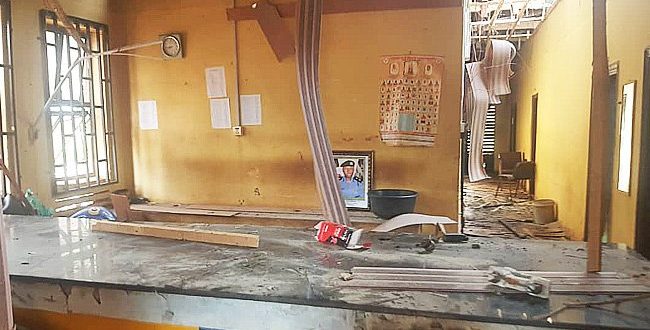 The Police station raided by the gunmen

Gunmen have attacked the divisional police command at Afuze, headquarters of the Owan-East local government area of Edo, killing the Divisional Police Officer (DPO) and three other officers on duty.

The hoodlums also attacked the office of the Independent National Electoral Commission (INEC) in the town, and destroyed electoral materials and burning down a police van in the compound.

The officers killed in the attack were: Tosimani Ojo, the DPO of the station; Justina Aghomon, a pregnant woman, Sado Isaac and Glory David.

A witness, Godwin Ikpekhia, told NAN on Wednesday March 13, 2019 that the incident occurred at about 8pm on Tuesday, March 12, 2019 while many of the officers in the division had gone on outside duties.

“We only heard gunshots and nobody knew what actually happened until Wednesday morning,” he said.

“The divisional police officer, alongside three other officers who were on duty were killed on the spot, inside the building.

“The hoodlums didn’t just stop at that; they went to the INEC office and were shooting sporadically at policemen who were on duty there. Election materials and a police van at the INEC office were burnt by the hoodlums.”

Muhammed Danmallam, Commissioner Of Police, who visited the scene, said that investigation would commence immediately.

Danmallam vowed that those responsible for the attacks would be brought to book.

“Urgent steps will be taken to curb the increasing cases of criminality in the Owan axis of the state,’’ he said.

Attacks on officers and men of the Nigeria Police have become quite unusual in the Owan area.

On July 14, last year, four police officers were killed at a checkpoint in the area and burnt inside their Hilux Patrol van.

Also on January 23, this year, Ohio Ezomo, All Progressives Congress (APC) House Of Assembly candidate for Owan-West, was kidnapped, while his orderly was killed on the spot.