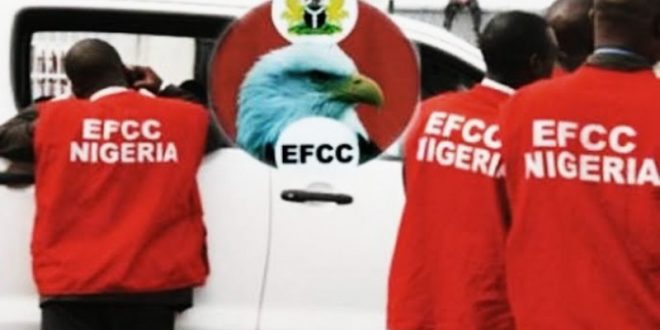 The EFCC charged Keshinro with nine counts bordering on theft, forgery and fraudulent use of the account.

According to Mrs Bilikisu Buhari, the Commision Counsel, the Polaris Bank staff committed the offence from 2016 to 2018 in Lagos.

Buhari alleged that Keshinro stole funds belonging to one Alhaji Ganiyu Oseni, whose account he managed.

Her words, “The defendant knowingly forged Baritos Nigeria Ltd’s document titled “Part Termination of Fixed Deposit – 1770522625 dated Dec. 12, 2016, and purported to have been signed and issued by Oseni.

According to the EFCC prosecutor, the defendant also forged three more Skye bank cheques which he fraudulently claimed were signed by Oseni.

“On Dec. 14, 2016 while being in the employment of Polaris Bank Plc, forged account number 1770522625 which was in the possession of his employer by making a debit of N10 million in favour of Hillcrest Solicitors.

“The debit was purported to have been ordered by Baristos Nigeria Ltd,” the prosecutor said.

“The applicant is not a flight risk, he has no prior criminal record. When he was granted administrative bail by the EFCC he always came to their office.

“He has been in custody since Dec. 17, 2019, I humbly pray that he be granted bail in the most liberal terms to enable counsel to have proper access to him,” Ehizoge said.

Buhari, however, opposed the bail application and asked that the defendant be remanded at the correctional center due to the overwhelming evidence against him.

Justice Oluwatoyin Taiwo in a short ruling, admitted Keshinro to bail in the sum of N5 million with two sureties in like sum.
Taiwo adjourned the case until April 8 for trial. (NAN).