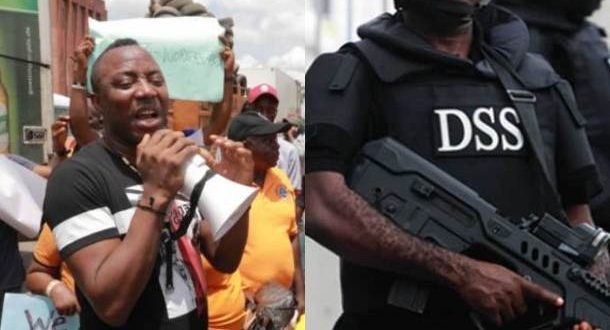 The Presidential candidate of the African Action Congress (AAC) in the 2019 election Omoyele Sowore was arrested by the Department of State Service (DSS) in the morning of Saturday August 3, 2019.

It was reported that the DSS picked him up and whisked him to Lagos Head office along CMD Road, Magodo, Ikosi, Ketu, Lagos

Before his phone was allegedly taken from him, the activist tweeted at about 1:24hrs “DSS invades Sowore’s”

“An eyewitness confirming that his phone was forcefully taken from him,” SaharaReporters said in a report.

“He also tweeted ‘Ja p’, confirming his phone must have been seized while trying to raise the alarm about his arrest.”

The medium said the arrest and detention of Sowore are not unconnected to “#RevolutionNow, a series of planned protests against bad governance in Nigeria” scheduled for Monday.

“At around past 1am, the armed men knocked on the door. I noticed immediately that these knocks were strange. And didn’t open. I looked and I saw men armed to the teeth,” he wrote.

“They started forcing their way in like armed robbers. But I knew they were DSS men, knowing fully well the attention RevolutionNow has garnered. Sowore wanted to open at first but I immediately told him who they are. He retreated and like magic, he was not in the room when they forced their way in- 8 of them.

“That was when he managed to tweet. By this time, I had been beaten and handcuffed. Phones were snatched from me. An order to block all exits came from the leader when Sowore was not found inside. He was later arrested at the gym in a gestapo manner and dragged after a bit altercation.”

The unidentified driver allegedly said the DSS threatened to shoot him after he attempted to stop his arrest.

“I quickly seized that opportunity to drive his car (I drive him) to block their SIENNA and Hilux they came in. They hit the Lexus Jeep like kidnappers would do to make way for themselves,” he wrote.

“I followed them immediately till we got to CMD Road around Ketu when one of them came down from the SIENNA and corked his gun, threatening to shoot me. I had to escape at that point.”