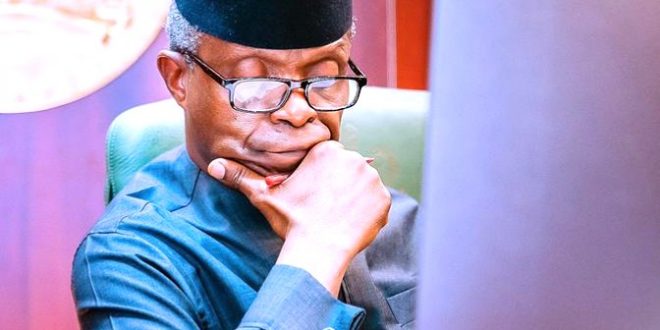 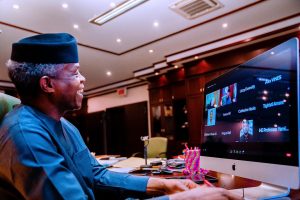 ABUJA – Vice President Yemi Osinbajo, SAN, has said that Nigeria’s priorities in a post-COVID-19 world include restoring economic growth in the immediate term, building resilience in the health sector, and repositioning the economy on a sustainable footing in the medium term while saving jobs and building domestic capacity and local production in critical areas.

According to a release e-signed and made available to StarTrend Int’l & online – www.startrendinternational.com by Laolu Akande, Senior Special Assistant to the President on Media & Publicity, Office of the Vice President, Osinbajo gave this summation during a virtual Chatham House interactive session on Tuesday themed: “Priorities for Nigeria’s Post-COVID Recovery”.

During the Chatham House interaction, the Vice President discussed the challenges posed to Nigeria by the global COVID-19 pandemic and the Nigerian government’s response aimed at ensuring lasting socio-economic recovery and development.

Prof. Osinbajo highlighted the significant impact of the Buhari administration’s Economic Sustainability Plan (ESP) as a crucial pivot in helping the country respond to the fallouts of the pandemic.

He explained that “the Buhari administration’s first priority was to protect people and their livelihoods in response to the fallout of the pandemic. One of the ways was to support the critical MSMEs sector through the Survival Fund scheme, a component under the ESP.”

According to the VP, “one of the specific interventions under the ESP was what we describe as the Survival Fund, which essentially was a fund to protect jobs and to ensure that during the course of the pandemic and immediately thereafter, informal workers in particular or private sector workers especially those in the informal sector, were at least able to continue to earn some wages.”

Prof. Osinbajo stated that through the Survival Fund scheme, over 300,000 beneficiaries, as well as businesses have been supported during the pandemic “by providing salaries for three months for beneficiaries, which include private school teachers, artisans, road transporters, taxi cab operators, and commercial tricycle operators in the urban areas.

“We also sought to protect the most vulnerable, in particular, the urban poor who were also hard hit. What we did was to provide direct cash transfers to the urban poor, many of them who are captured in a social register. In the first phase of that, we are able to benefit about 1 million beneficiaries, and we are now in a position using the same social register to scale up the programme to about 20 million beneficiaries.”

The Vice President also highlighted the work being done by government in the areas of improving broadband connectivity and expanding the country’s national identity base, which he stated would help in developing the country’s existing social register and other pro-poor programmes under the Buhari administration’s Social Investment schemes. 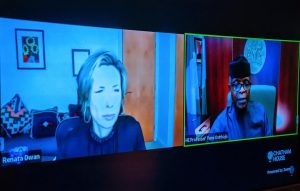 Also, to stimulate production in the economy, Prof. Osinbajo noted that the Federal Government is “focused on energising existing value chain in agriculture, construction and renewable energy,” even as he highlighted the impact of the ESP’s agriculture scheme and social housing programme in improving local productivity and creating jobs.

“Our agriculture programme (under the ESP) aims at expanding productivity, creating a total of about 5 million jobs. What we have done so far is that we’ve been able to register and geotag about 5 million new farmers to farmland areas. The programme is also supporting smallholder farmers by linking them to extension services and low-interest input financing.

“We also have a mass housing programme which is designed to deliver affordable homes through direct intervention in the housing construction sector aimed at creating 1.8 million jobs together with the construction of 300,000 homes in the first phase. At the moment, the programme is ongoing in 12 states which will be expanded to all of the states in the federation.”

The Vice President further explained that the ESP was developed as a short-term strategy to address the two-fold challenge posed by the pandemic: to both public health and the national economy.

For instance, in the health sector, Prof. Osinbajo stated that a critical area for government in the fallout of the pandemic “is in doing far more with our research institutions and investing far more in these institutions.”

He said, “since February 2020 (when Nigeria confirmed its first COVID-19 case), we have significantly ramped up our testing and case management capacity. We have activated from about five molecular laboratories to about 120, most of them public laboratories.

“We have expanded the footprint of our sovereign public health response capacity, especially at the sub-national level, and in areas where such capabilities didn’t exist before.

Prof. Osinbajo further said government was also focused on promoting a culture of preparedness across all levels of the country’s health care system by building resilience in the health sector.

“Going forward,” he said “we are committed to building on the exemplary dedication of our health workers and strengthening the capacity of our health systems to withstand shocks created by infectious diseases and pandemics such as we are experiencing.

“One reason why we’ve been able to manage this pandemic better than expected is that we did have some existing public sector infrastructure to work with, the Ebola outbreak in 2014, our ongoing battles with Lassa fever, our successes with polio eradication all helped us to tighten our pandemic contingency plans, strengthen our emergency coordination and surveillance capacity and also enhance investments in public health laboratories.”

The Vice President highlighted the government’s efforts through the Nigeria Centre for Disease Control (NCDC) in tackling the pandemic, adding that it also prioritized the strengthening of the country’s public health infrastructure

“While it is true that in many respects, our hospital infrastructure still lags behind in standards, especially when compared with richer countries of the world, we’ve been able to draw on the resilience and adaptability of our tried and tested community health system,” he noted.

The VP also called for global action in ensuring access to vaccines, especially in poorer countries, noting that, “there are justifiable concerns, in my view, about the certainty of fair and equitable access to vaccines, as well as the likelihood that poorer countries would be left behind if the distribution of these vaccines is determined by the nationalistic sentiments.” 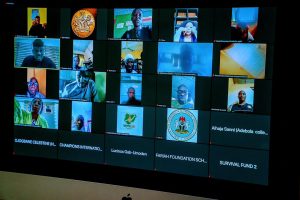 “As part of our recovery efforts, Nigeria has taken delivery of about 4 million doses of the COVID-19 vaccines under the international COVAX scheme and we have commenced vaccination of our people. This year, we will receive 84 million doses of the Oxford AstraZeneca vaccine under that same scheme, which would be enough to vaccinate about 20 per cent of our population.”

According to the VP, “in our globalised environment, national self-interest is insufficient to address the challenge of a global pandemic, Indeed, in a world that is interconnected as ours, any plan other than a global plan is bound to be counter-productive.”

The Vice President further stated that a policy imperative of the Buhari administration is also hinged on encouraging value addition in every sector of the economy, especially to consolidate areas where the country had comparative advantage.

The live event was chaired by a senior official of Chatham House; Dr. Renata Sevan.