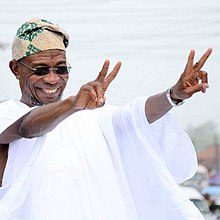 The immediate past Governor of Osun State Ogbeni Rauf Adesoji Aregbesola has compiled the list of the 40 man cabinet members, as well as other principal officers that will be appointed by the Lagos State Governor Elect, Mr. Babajide Olushola Sanwoolu immediately after his inauguration come May 29.

Aregbesola had in the course of the week directed the Governor-Elect to disband his campaign outfits and await the list of members of the transition committee, selected for him that will interface with the incumbent Governor Akinwunmi Ambode’s transition team. Mr Tayo Ayinde the Director General of the outfit immediately compiled with the directive on behalf of the Governor-Elect.

Aregbesola who graced the Alimosho federal constituency meeting on Saturday March 23, 2019, told teeming members of the party in the constituency that he is back in Lagos State and back in control.

However this move by Aregbesola did not seat well with the members of the highest organ of the All Progressives Congress (APC), in the state: the Governor’s Advisory Council GAC, as members have directed Alhaji Chief Tajudeen Olusi to also compile the list of cabinet members that will serve alongside the Governor-Elect, they demanded a broad based, equitable and one that caters for the interests of all persuasions in the party.

Aregbesola has also proposed the appointment of 100 Senior Special Assistants that will serve in the Sanwoolu administration. He has awarded twenty slots to his Alimosho constituency. Also the current Commissioner for Wealth Creation Mrs. Uzamat Akinbile Yusuf from Alimosho is slated as the new Secretary to the State Government.

This medium learnt that the APC national leader and Lagos APC leader specifically instructed Aregbesola to take charge of Lagos State for him, as he will be busy with his 2023 presidential project, that entails a lot of pan Nigeria political networking and bridge building.

He told his close confidants that Aregbesola is a good and loyal political servant he can entrust Lagos to and no one else, since he has no mercurial political abilities or initiatives.

Tinubu by this act as jettisoned the power sharing agreements, allegedly facilitated by Vice President Yemi Osinbajo, with anyone or any group in the build up to gubernatorial and state house of Assembly election in the state. He directed anyone or group with claims to interface with Aregbesola.

Aregbesola on Friday March 22, 2019 observed Jumat prayer at the Lagos State Central Mosque, he was there to give instructions to Muslim members of the Lagos State House of Assembly on his expectations in the twilights of the Ambode administration and the configuration of power structure in Lagos State post May 29.

This development has place party members, officers, elected officers and appointees on edge.

However the GAC has vowed to nip the influence of Aregbesola at this stage before it spirals out of their control completely. They bemoaned the fact that they were used to shove out Ambode, only to become puppet to a failed Osun political returnee.

Tinubu in his characteristic manner has bailed away from Lagos to quarter himself in the capital city of Abuja, he shunned all moves to discuss Lagos post May 29 issues. Feelers revealed that he is specifically avoiding members of the GAC who he has betrayed by foisting Aregbesola on the collegiate as his deputy.