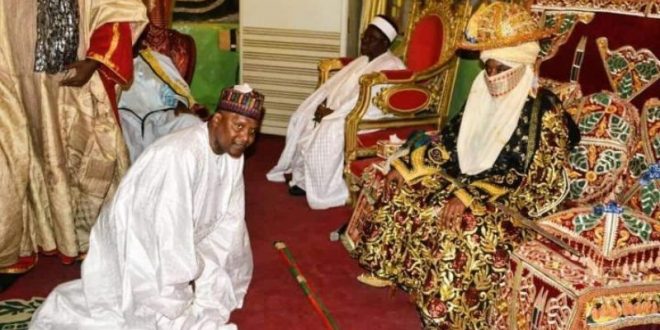 How Aliko Dangote Prevails Over Ganduje On Emir Sanusi

StarTrend May 17, 2019 HEADLINE, NEWS Comments Off on How Aliko Dangote Prevails Over Ganduje On Emir Sanusi 80 Views

More facts have merged on how Africa’s richest man Alhaji Aliko Dangote intervened in the impasse between Governor Abdullahi Ganduje and Emir Sanusi II of Kano.

It was gathered that troubled started when the powerful Emir supported the opposition party in the just concluded governorship election which Ganduje eventually won through a rerun.

The state governor had been on the move to remove the Emir since 2018, but the intervention of some powerful people in the state resolved the issue temporarily before the case was reopened by the state government after conclusion of elections.

According to Daily Trust, a source said Aliko Dangote had to intervene when it was obvious that Ganduje was all out to demote the Emir.

“I can confidently tell you that when the probe was renewed and the move for the creation of four new emirates in the state started, the Emir sent the renowned business mogul, Alhaji Aliko Dangote, to Ganduje to plead with him to stop the two moves.

It was also gathered that Ganduje gave the Emir three options: To resign, be removed, or create additional of more emirates from his “empire.

“However, Ganduje in his response told Dangote to go back and tell the Emir that he should choose from three alternatives: To resign on his own or be removed from office or the government will create additional emirates in the state.

Daily Trust further confirmed that the action of the governor against Emir Sanusi II was because of the partisan of the Emir in the political affairs of the state.

“Ganduje assured Dangote that one of the three options must be implemented by the government since the emir will not stop playing partisan politics against him. If not for the quick intervention by Dangote, Ganduje would have dethroned the emir,” Daily Trust quoted the source as saying.

Recalled that Kano Emirate was split into five on Wednesday as part of the move reduce the influence of Emir Sanusi II.

The exercise which lasted only two days fuelled speculations that the government was going after the emir over his rumoured support for the opposition during the recently concluded governorship election.

“It will reach to a point where the commission will transfer the case to court for the emir to defend himself. After our findings, whoever is found wanting in misappropriating the public funds will be dragged before the court.”

The source also stated that Emir Sanusi II may be transferred to another emirate and replace him with one of the newly appointed emirs.

The transfer of the Emir Sanusi II to another Emirate is likely to cause unrest in the state, a political observer said.

Previous We Were Promised N109billion By Jonathan’s Government – Miyetti Allah
Next Stop Eating Foreign Rice, They Are Poisonous – Custom Boss