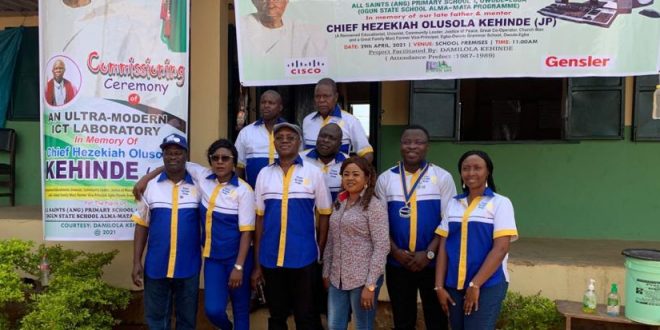 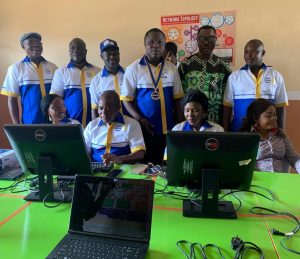 Kehinde, who was a pupil in that school between 1987-1989 set, said he donated the computer laboratory with the aim of calling the attention of the government to the sorry state of the school.

He also said the gesture was in memory of his late father, Chief Hezekiah Olusola Kehinde (JP), who during his lifetime was a renowned educationist, community leader and former Vice Principal of Egba-Owode Grammar School, Owode-Egba.

Kehinde, represented by Mr. Tunji Akoni, an ICT Consultant, former Ogun State Schoolnet Project Coordinator and Commissioner 1, Ogun State Independent Electoral Commission (OGSIEC), emphasized that the project was to enhance the capacity building and empower the pupils in the area of computer science.

“This project is borne out of a very strong belief that educaton remains the best chance to achieving one’s dream. The majority of students who attend this school come from very humble backgrounds. But they also deserve to get quality educaton. I am only contributing my own quota to ensuring that the poor students who attend this school get the best of education,” he said. 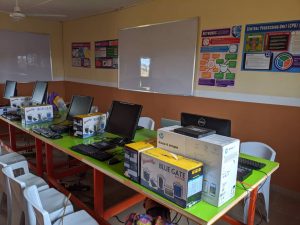 Also, the President of Rotary Club of Abeokuta, Rotarian Kayode Oladipo said quality educaton is a responsibility of all and sundry, promising that his club as a stakeholder in the project would ensure sustainability and constant monitoring of the project for better value driven metrics to the pupils.

While commissioning the Project, the Ogun State SUBEB, Chairman, Chief Femi Majekodunmi, who was represented by the Board’s Secretary, Mr. Olalekan Kuye commended the initiative, describing it as a giant stride in the history of donations, enjoining more well meaning Nigerians and old students to usually give back to their Alma mater.

On behalf of the Caretaker Chairman, Obafemi Owode Local Government Are, the Secretary, Hon. Hameed Osho, hailed donor’s personal commitment to social responsibility, aimed at exposing the pupils to computer learning, promised that the local government would assist in securing the computer laboratory from any possible theft.

The Headteacher of the school, Mr. Kayode Fatoki appreciated the donor for his magnanimity and generosity, appealing to other old students of the school to take a cue and give back to their Alma mater.

The event witnessed cultural dance performance by the pupils to the delight and excitement of the guests. Among dignitaries presented at event include Representative of the Special Adviser on Education to the State Governor, Mrs. Ronke Soyombo, President, Computer Teachers Association of Nigeria (CTAN), Ogun State, Mr. Temitopeoluwa Emosu among a host of others. 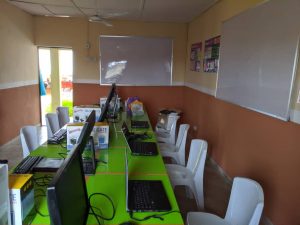