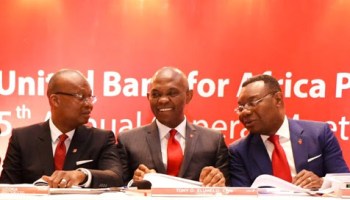 LAGOS: As the pandemic Coronavirus (Covid-19) continue to rise in Nigeria and dislocate the global and domestic capital markets, United Bank for Africa (UBA), Guaranty Trust Bank (GTB) and seven other companies have postponed their annual general meeting (AGM).

According to Africa Prudential in a release e-signed by its company secretary, Joseph Jibunoh and made available to the media, following the Covid-19 global pandemic, which necessitated the postponement of the seventh AGM of the company and cancellation of the notice of some, the board of directors of Africa Prudential in exercise of the powers conferred on it by Section 379(2) of CAMA, has approved that an interim dividend of 70 kobo per share be paid to shareholders whose names appear in the Register of Members of the Company as at the close of business on March 23, 2020.

As confirmed cases of Covid-19 infection quadrupled the nation activities, governments announced closure of schools and restrictions of large socio-religious gatherings, quoted companies have postponed their scheduled AGMs of shareholders.

As at March 24, 2020, 24 companies have released their audited results for the financial year ended December 31, 2019 and out of these 14 companies have notified the investing public of their general meetings, while five companies have been able to hold their AGM, we gathered from Leadership

Despite the postponement of the AGM, there is likelihood it will not affect the payment of dividend being proposed by the companies such as Africa Prudential. The company, which was supposed to hold its AGM on March 23, 2020 has paid the dividend of 70 kobo per share to its shareholders.

According to the Exchange, companies that plan to hold their AGMs in the near future should adopt the safety procedures provided by the Nigeria Centre for Disease Control (NCDC) in preparation for their AGMs. Such companies must also adequately communicate these procedures to all invitees to the AGM.

The NSE however noted that companies that wish to postpone their AGMs or are yet to schedule their AGMs, must comply with extant rules and regulations on the timeline and conduct of AGMs.

According to the rules, companies must hold their AGM within nine months from the end of their financial year end or within such extended period as may be approved by the Corporate Affairs Commission (CAC).

Section 213(1)(b) of CAMA meanwhile permits the CAC to extend the time within which an AGM may be held by a period not exceeding three months.

“The Exchange advises all listed companies to strictly adhere to communications and advice from the health authorities at the NCDC, World Health Organization (WHO) and Lagos State and Federal Ministries of Health in the effort to tackle this dreaded virus,” NSE stated.

Also, Securities and Exchange Commission (SEC) has approved a 60-day extension, in the first instance for public companies and capital market operators to file their 2019 annual reports and first quarter, 2020 reports.

Looking at the Nigerian equities market so far in the month of March showed that it has lost 17.1 per cent as at March 24, 2029 and year-to-date loss of 10 per cent as a result of global oil price crash and increasing spread of Covid-19.

Capital market analysts noted that this is the worst start to a year since 2016, and the reaction of investors reflects concerns about Nigeria’s vulnerability to external shocks, mainly oil, saying that the slowdown in global oil demand, in addition to the decision of OPEC+ to abandon output cuts, has caused a 50.2 per cent year-to-date drop in oil prices to $32.9/bbl as at March 12, 2020, the lowest in over four years.

Speaking the chief operating officer of InvestData Consulting Limited, Ambrose Omordion said that the impact of the virus seems heavy, killing more stock markets and economy than people across the globe, sending panic waves around the world, more devastating than the financial meltdown of 2008.

The chairman of Association of Securities Dealing Houses of Nigeria (ASHON), Chief Oyinyechukwu Ezeagu assured the investing public that the market would soon bounce back.

Although ASHON acknowledged the high level of down swing on the market in the last couple of days, saying that fundamentals of the quoted companies remain strong. He explained that Nigeria’s stock market remained part of the global exchanges and as such any development in the global market would impact on its operations.

“The effect of the coronavirus is gradually affecting trading all over the world and whatever happens elsewhere reflects in our market. The centre of it all is China and being a major world power both in productive and consumption capacities, any ill wind affecting China would naturally cause a big sneezing to the rest of world.

”Investors should not panic. The share prices will bounce back. The companies’ fundamentals remain strong. Many investors are taking advantage of the bearish run to beef up their portfolios,” said Ezeagu.