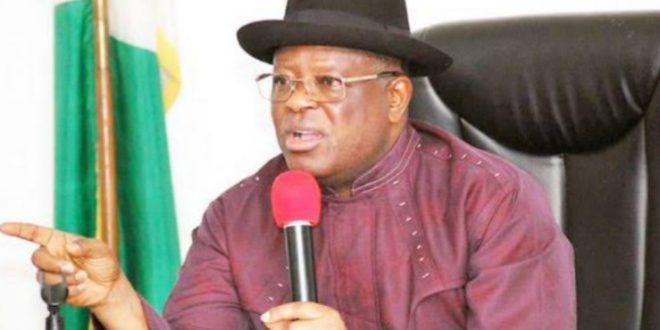 ABUJA: Governor David Umahi of Ebonyi State has explained that the change in balance of the ECA from USD$325 million last month to USD$71 million is due mainly to the new USD$250 million investment in the Nigerian Sovereign Investment Authority (NSIA), approved by the Council.

According to a press release e-signed and made available to StarTrend Int’l magazine & www.startrendinternational.com by, Laolu Akande, Senior Special Assistant to the President on Media and Publicity, Office of the Vice President, Umahi stated this while answering reporters’ questions at the end of the NEC February meeting on Wednesday, February 26, 2020, saying media speculations regarding the Excess Crude Account being depleted by state governors was not true. He explained that the operation of the Account is conducted with their knowledge and due approvals of the National Economic Council, NEC.

Governor Umahi further explained that the other expenditure of USD$4 million being significantly reduced consultancy cost approved by the Council besides the USD$250 million NSIA investment. According to Umahi, who spoke on behalf of the Council members, “So no money is missing”.

The National Economic Council holds monthly and is chaired by Vice President Yemi Osinbajo, SAN, comprising the 36 governors, the Minister of the Federal Capital Territory and the Governor of Central Bank.

A presentation was made by the Minister of Health, Dr. Osagie Ehanire, on the Nigeria Centre for Disease Control on Lessa Fever. He said “103 confirmed cases and 13 deaths reported from 18 States (Ondo, Ebonyi, Edo, Bauchi, Plateau, Benue, Enugu, Gombe, Kaduna, Kastina, Kogi, Sokoto, Taraba, Delta, Rivers, Adamawa, Nasarawa and Lagos). Of the confirmed cases 72% are from Edo, Ondo and Ebonyi states,” noting however, that there is a decline in the number of new cases in Benue.

On the efforts at addressing Lassa fever, the Health Minister said National Multi-Sectoral Emergency Operation Centre (EOC) has been activated while state Health EOCs are activated in affected states, adding “intensive sensitization of the public on safety measure needs to be carried out”.

Ehanire also assured of the country’s readiness to respond to the Coronavirus pandemic (COVID-19), saying multi-sectoral Coronavirus Preparedness Group has been established, 4 diagnostic testing facilities are ready at National Reference Laboratory in Abuja, LUTH in Lagos, Irrua in Edo State and Redeemer’s University in Osun State.

NEC was also updated on the status of ownership structure of the Electricity Power Distribution Companies (DISCOs) by the Council Committee set up for the purpose. According to the Committee, it has received responses from the public, while forensic audit of the DISCOs are being conducted.

While requesting for additional time to complete the report, the Committee stated that state governments would provide it with details of their investments in the electricity companies.

Council was also informed that Edo State is hosting 20th National Sports Festival (NSF) from Sunday, March 22nd, 2020, while the new governor of Bayelsa State, Senator Duoye Diri was introduced and welcomed by the Council.