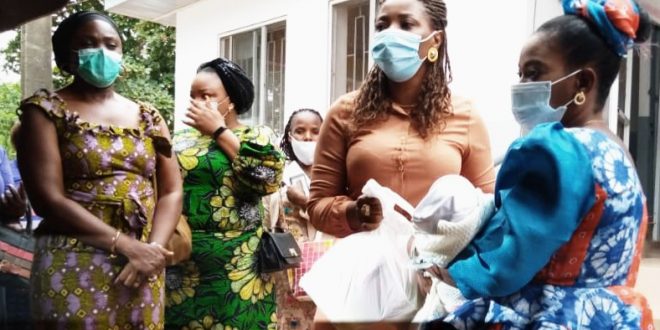 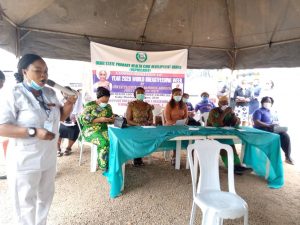 SAGAMU – The wife of Ogun State Governor, Mrs. Bamidele Abiodun, has admonished the Nursing women on exclusive breastfeeding for healthy growth of their babies in continuation of the Year 2020 World Breastfeeding Day, at Makun Health Centre in Sagamu Local Government Area of Ogun State.

According to a release e-signed and made available to StarTrend Int’l magazine & www.startrendinternational.com by Adeboyejo Sola of Sagamu Local government, the First Lady of Ogun State, who was ably represented by Mrs. Tolulope Abdul, wife of Ogun State House of Assembly Member, Sagamu Constituency 1, in her speech enjoined all Nursing mothers on extensively and exclusive breastfeeding, stressing that, “breastfeeding creates bond between mother and child, it comes out at good temperature not cold nor hot, not expensive and it serves as a means of family planning to mothers.”

Mrs. Abdul maintained, that since growth is synonymous to human development, all mothers and caregivers should imbibe exclusive breastfeeding, which will help in development of the child’s brain and general body building. It would also improve their immune system against sicknesses and diseases.

She also emphasized the importance of Colostrum, which according to her, happened to be the first food produced substance in the mother’s breast as a natural immunity Antibodies as resistance to various diseases and infections.

The wife of lawmaker further charged all mothers to join hands together with Her Excellency, Mrs Bamidele Abiodun in order to move Ogun state forward. 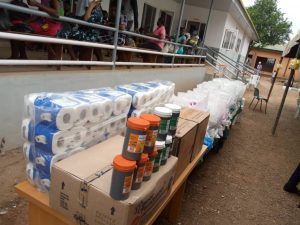 She later presented gifts items to the Nursing mothers, which include Diapers, Shawls, Detergents, Disinfectants, Toilet rolls and other various items.

Earlier in her speach, while welcoming Mrs. Bamidele Abiodun and her entourage to the Local government Area, the Chairperson, Sagamu Local Government, Mrs. Aminat Salami, thankedOgun First Lady, for identifying and celebrating with the Nursing mothers in the local government area on the auspicious occasion.

Mrs. Salami also advised the Nursing mothers to make use of the training and counseling made by the resource persons, for their benefits and that of their children.

She added that exclusive breastfeeding of their babies would help their bodies to readjust back to its former form after childbirth, as well as helped in child spacing as agreed by their husbands.

While speaking, the Local government Area Primary Health Care Coordinator, Dr Oyedele Mayomi appreciated the good gestures of Mrs. Bamidele Abiodun for her interest in the wellbeing of all citizens of Ogun State, saying, “being a mother herself, she had proved to understand the importance of exclusive breastfeeding as the most important food for babies, which made the event a reality at the instance of Her Excellency, Mrs. Bamidele Abiodun.” 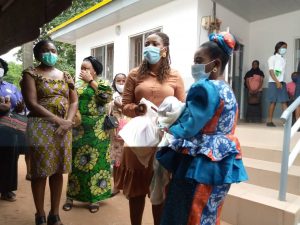 Dr. Mayomi therefore, encouraged, nursing mothers to make it a priority when their babies demanded for breast milk.

During the training session, Mrs. Adelaja Adefunke, a nurse at the centre, show a practical demonstration of proper sitting position and how to carry babies while breastfeeding in order to avoid mother’s neck and back pain, stressing that, “the exercise of breastfeeding, is give the child to the breast not give the breast to the child.”