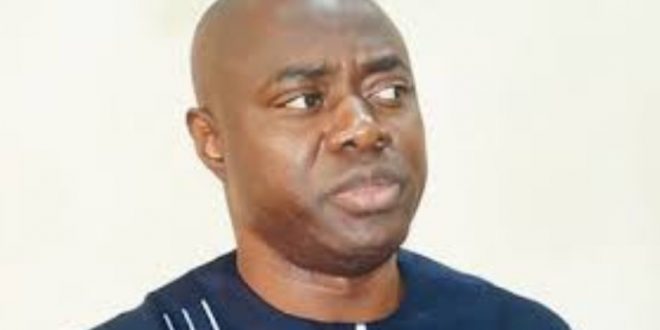 Idowu Hamed May 30, 2019 HEADLINE, NEWS Comments Off on Gov Makinde I n A showdown With ALGON Over Dissolution Of LGs 82 Views

An advice has gone to members of the Association of Local Governments of Nigeria (ALGON), Oyo State chapter, to disregard Gov. Seyi Makinde’s directive dissolving the councils.

Ayodeji Abass-Aleshinloye, the ALGON Chairman in the state, said at a news conference in Ibadan on Thursday May 30, 2019 that the governor’s action was illegal.

The newly sworn-in governor Makinde had in a statement by his Chief of Staff, Oyebisi Ilaka on Wednesday May 29, 2019, announced the dissolution of all the councils and Local Development Areas (LCDAs).

Makinde had also directed the 33 local governments and 35 LCDAs chairmen to handover to their Heads of Local Government Administration (HLA) or the most senior directors.

The governor further placed an embargo on financial transactions on all local and state government accounts until further directives.

Abass-Aleshinloye however said that no council chairman would vacate office as a result of the governor’s order.

“The purported dissolution is illegal, undemocratic, violation of rule of law and contempt of a subsisting court injunction,” he said.

He said an Ibadan High Court, presided over by Justice A. A Aderemi, had on May 6, granted an injunction restraining the state governor and other government agencies from dissolving the councils and LCDAs.

The ALGON chairman said that the order was given in Suit NO: 1/347/2019, adding “there is also a recent Supreme Court judgment against such act of illegality by governors.

“This purported dissolution was done in flagrant disobedience to a subsisting court order, it is a crude breach of the right of our people to be democratically governed at local government level”.

Abass-Aleshinloye said the governor had no powers to dissolve any democratically elected officer in any arm of government.

“Under no law can a state governor summarily dissolve elected local government council or any elected organ of governance created by the constitution,” he said.

He said that ALGON would deploy every democratic, constitutional and peaceful means to correct such illegal act being perpetrated by the governor.

“We urge all duly elected council and LCDA chairmen and councilors to remain calm and peaceful in the face of the provocation and assault on constitutional democracy.

“We call on the security agencies to be on alert and to provide full security to all chairmen and council secretariats,” he said.(NAN).