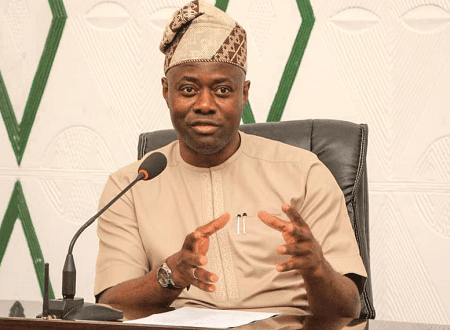 IBADAN: Despite the denial and counter denial, observers have been able to spot a brewing crisis between the Governor of Oyo State, Seyi Makinde and his Deputy, Rauf Olaniyan.

According to the grapevines, the Governor and the number two man in the State are having some issues they are both trying to play down as they understand the implication if it gets to the public.

It was scooped that the issue between Makinde and Olaniyan bordered on the Deputy Governor’s loyalty.

Rauf Olaniyan was said to be a distinguished individual who had carved a niche for himself in politics and public service before meeting Seyi Makinde.

Political pundits had eelier predicted what is at the moment happening as the Deputy Governor is believed to be very ambitious.

It was gathered that he Oyo State Deputy Governor had in the beginning have his eyes on the seat of power and was actually disappointed when he was asked to step down and work with Seyi Makinde as his Deputy.

It was alleged that the Deputy Governor did not really like what his camp termed a “one-man show” of their administration.

He felt left out, thinking he was supposed to be running the State alongside the Governor, the way it is done in Lagos between Governor Sanwo-Olu and his Deputy, but his boss felt otherwise.

There was also an issue of an alleged N50m renovation fund the Governor approved for his Deputy at the start of their administration.

What eventually soured their relationship was the allegation that the Deputy Governor was criticising his boss.

He was said to have reported Governor Seyi Makinde to some Governor-colleagues who eventually hinted the Governor, advising him to be careful of his Deputy.

Oyo State people were familiar seeing the smiling face of the Deputy Governor beside his boss at any event and State functions.

Interestingly in the past few months, the two drivers of Oyo State administration stopped attending functions together and this raised questions as the Governor is seen going about without his Deputy beside him.

People also added the figures when the Governor contracted the coronavirus disease and was going to be quarantined.

He appointed the former Chief Medical Director of the University College Hospital, Ibadan, Professor Tope Longe to represent him on the committee in his absence.

Many thought he would have appointed his Deputy. Even the opposition party, the APC must have spotted the lapse as they called public attention to that.

The Governor and his Deputy were said to be playing well their differences that only people close to the government know what is happening.

Makinde as the Governor of Oyo State is regarded as the “star boy” among the Governors of   the South-West as he appeared to come prepared into governance with a different method he adopted to drive the State.

The Governor is believed to be bringing governance to the door of the common people at the expense of politicians and other players in the State who appeared to be not so comfortable with his leadership style.