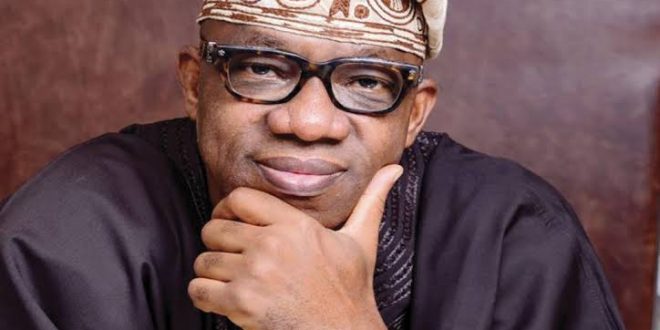 ABEOKUTA – The Radio, Television and Theatre Arts Workers Union (RATTAWU) and Nigeria Union of Journalists (NUJ) of Ogun State Television (OGTV), have indicted the Board Chairman, Mr. Oladunjoye of gross professional misconduct over the complicity in the leaked video.
Recall, a supposed telecast of the Ogun State Governor, Prince Dapo Abiodun to commemorate the May Day celebration on May 29, 2021 was leaked by yet unknown persons and went viral on social media.

The video which generated lots of controversies on the internet, shows Governor Abiodun making corrections on the prepared speech in the telecast, but received more knocks than commendations from various quarters.

Following the embarrassing incident, about 14 top Senior Staffers of OGTV have been placed on indefinite suspension after being quizzed by the Department of State Security (DSS).

However, the incident took a dramatic turn last week when staffers of the state government-owned television station fingered the Board Chairman, Mr. Tunde Oladunjoye of complicity in the leaked video.

The unions in a letter addressed to Governor Abiodun through the office of Head of Service dated June 21, 2021 with reference number: JAC/OGTV/2021/25 titled “LEAKED UNEDITED VIDEO OF YOUR EXCELLENCY APOLOGY: WE SMELL A RAT” accused Mr. Oladunjoye of discreetly downloading official documents from the station’s server with assistance of two unknown external persons, the same way the leaked video was downloaded.

They claimed that, the unofficial downloads was carried out on two occasions and incidentally each occasions involved two yet to be transmitted news report of the Governor’s activities.

They maintained that, although, they were not aware of Mr. Oladunjoye’s alleged dubious act until the recent development involving the recording of the governor’s second anniversary broadcast.

They however, queried why Mr. Oladunjoye would discreetly downloaded from the server, and not the off-air dub.

They therefore, urged the Governor to tender justice with mercy and use the instrument of office to compel the investigation of the Chairman to disclose the identity of the in-house/external persons downloading documents from the station’s server.

They equally urged the Governor to find a place in his heart to forgive the station and reinstate all suspended staff back to work to reduce the workload on the limited staff at the station.

The letter jointly signed by Comrade Oluwakemi Oladeinde, Chairman, JAC & RATTAWU OGTV, and Comrade Bisi Alarape, Vice Chairman, JAC and NUJ OGTV Chapel reads in part: “We want to begin this letter by tendering our unreserved apology for the embarrassment brought to Your Excellency and indeed the entire people of Ogun State as a result of the leaked video by enemies of progress.

“The development which was first of its kind in the last 40 years of OGTV has brought us low in spirit and our morale to the lowest level ever. We felt embarrassed and depressed as an organization reputed to be extremely loyal to the State Government in power. We tender our unreserved apology to Your Excellency, Prince ‘Dapo Abiodun, MFR and all the Stakeholders who have the State’s best interest at heart over this unexpected and unbelievable sad incident. We are pleading for mercy and forgiveness from Your Excellency.

“Your Excellency sir since the unfortunate incident happened, the two (2) Unions in OGTV, RATTAWU and NUJ have made all efforts from our side to unravel this unprecedented infamous development.

“While the State Security Service was working to find out the real culprit and the committee set up by government was trying to dig out the matter, the two unions were working assiduously, separately and jointly to find out black sheep in our fold. Our investigation although could not point out to any individual for now but we smell rat judging by the activities of the current Chaiman of OGTV’s Board of Directors — Mr. Tunde Oladunjoye.

“Sir, Ogun State Television (OGTV) since inception has had thirteen (13) Board Chairmen. The situation has never been so bad with what we found ourselves in the last eight (8) months when the current Chairman came with a mind perhaps of becoming the CEO with Executive power had tried all possible methods and tricks of divide and rule to pull the Station down at all costs.

“On his assumption of office, the first thing Mr. Chairman did was burning of incense within the premises of the station. This is rather a strange practice in a Government office.

“The Chairman has brought division within the rank and file of staff and obtaining documents which he would not authenticate before publishing. He had maligned staffers name accusing them of embezzlement of millions of naira without investigation. There are no documents to support his vicious claim. He had attempted to drag us as Union leaders into this murky water at one time or the other but for divine intervention.

“His Excellency Sir, before the unfortunate episode which has bruised our ego seriously as responsible Media practitioners, the Chairman has engaged someone still unknown to us to be downloading offcial documents from the station’s server, the same way the leaked document was downloaded. This was carried out for him on two occasions and incidentally each occasions involves two yet to be transmitted news report of the activities of His Excellency. We were not privileged to this dubious act of the board chairman in person of Mr. Tunde Oladunjoye until this current development involving the recording of Your Excellency’s Second Anniversary Broadcast.

“The question arises as to why the discreet downloading? why downloading from the server? Why not the off air dub? Why waiting till after transmission before calling attention to errors since he has unofficially and dubiously obtained the clean copy from server? Who are the staff doing it for him? Why the Governor’s film at all times? Meanwhile, his past record with two fomer Govenors is an indication of his unpredictable behavior mischievous at the end he brought dent to their administration full of castigation on their shortcoming until he was ejected either by panel of enquiry or out rightly removed from the offce he occupied.

In our opinions, the Chairman, Mr. Tunde Oladunjoye has demonstrated his ill mind to us as station. While not claiming with absolute authority that he was the culprit in the current unfortunate debacle that wants the head of innocent souls to roll, it will not be wrong to accuse the Board Chairman of complicity in the current embarrassing situation we found ourselves and the serious aspersions on us as a Corporate entity.”

They continued, “We are pleading with Your Excellency in the name of God to tender justice with mercy. We had learnt our lesson in hard and bitter way and we promise to guide against such occurrence in every possible ways.

“We are pleading with Your Excellenoy to use the instrument of office to compel the investigation of the Chairman to disclose the identity of the in-house/external person downloading documents from our server. External personnel could be involved by hacking into our server.

“Your Excellency Sir, our investigation on Mr. Tunde Oladunjoye reveals that he was never a broadcaster but a freelance journalist who has never been stable on a media work.

“Mr. Tunde Oladunjoye has always been a thorn in the flesh of State actors including former Governors, Commissioners and Permanent Secretaries.”