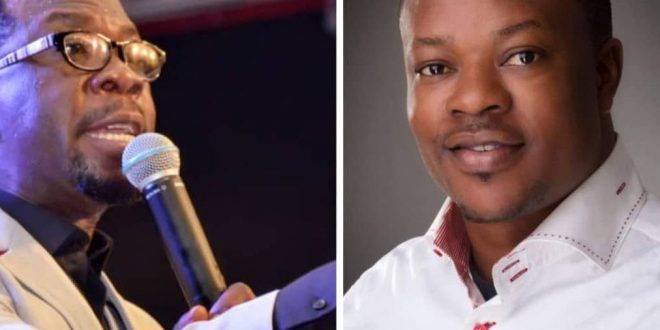 LAGOS – Oluwaseun Fabiyi, the media aide to the popular televangelist, Prophet Israel Oladele Ogundipe, aka Genesis, has denounced the online news by some bloggers making round on the social media which was credited to the Man Of God, in his recent preaching that assassins, kidnappers go after Prophet, Oladele Genesis over alleged threats to expose Revd. Esther Ajayi.

Recall that Prophet Israel Oladele recently shown his grievances over people who neglected him when he was going through trials of life.

Though he made some statement inside Genesis Global Headquarters, located at Duro Isola Street, Dalemo, Alakuko area of Lagos in which the video of that preaching went viral as it reached over 70 millions viewers on the social media
Surprisingly, to those that still have the 7 minutes of that video clips can attest that there was no area on the said video that the man of God ever mentioned Revd. Esther Ajayi’s name rather he was expressing his grievances about life as Holy Spirit had directed him.

However, this is just a defamation of character emanating from some of half-baked journalists/bloggers who came up after Atorise sending a threats messages to the Man of God, in which Prophet Genesis was trying to respond to ‘Atorise’ threats to life, but it saddened me and disheartening that some online bloggers painted, twisted it by alleging the prophet of God was actually directing the message to Revd. Esther Ajayi.

Fabiyi however said, “If I may ask; how does Prophet Israel’s responses to Atorise’s threats where he said he has been receiving distress calls from unknown persons over Atorise’s instruction to renounced his statement within 24hours on Revd. Esther Ajayi as those journalists painted.”

According to Oluwaseun Fabiyi, the Publisher, Bethnews magazine/online and also Secretary CJPAN who is the Media Aide to Genesis, said the Man of God had been wrongly quoted and misrepresented by those quack, copy and paste journalists.

“Besides, I, Seun, the Media Aide to Genesis hereby dismissed in totality the online claims because there was never a time the popular televangelist ever mentioned Revd. Esther Ajayi’s name in any of his messages and that there’s no iota of truth in what those online reports in various platforms.”

The ever busy and truthful man of God who is currently and seriously working on the forthcoming prophetic Standout Conference themed: 5G which is aimed at bringing drastic solutions to the Nigerian economy, hereby advised the general public, church members, and his online followers to ignore those online reports, faulsly circulated on social media for their cheap publicity, linking him to Revd. Esther Ajayi by ignoring Atorise threats to life as it’s totally baseless and unfounded.

“On a final note, the youths and masses philanthropist and the popular televangelist would continue to preach the truth and upholds the scriptures as directed by the Holy Spirit.”