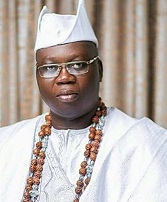 ABEOKUTA: The Aare Ona Kakanfo of Yorubaland, Gani Adams has calling on the Federal Government to launch an investigation into the recent three blast which occurred in the South West, stressing that such incidences are beyond the ordinary.

Aare Adams who made the appeal on Sunday, March 29, 2020 in a statement also called on all South-West Governors to be security vigilant, saying that “Yorubas are not convinced that it was an ordinary blast, but suspected to be bomb blast, which must be duly investigated”.

His words “It’s unfortunate that such incidences are coming at this trying period of coronavirus across the globe. Investigation at our disposal has it that, those behind the bomb blast are now targeting other South-West States, hence the need for all Governors and indigenes to be at alert.

“We are not convinced that, all these are ordinary blast, but a bomb and therefore it is important and necessary for government to carry out proactive investigation on these incidents which occurred in spate of three weeks in Lagos, Ekiti and Ondo States”

The Aare Ona Kakanfo of Yorubaland further stated that, with Lagos blast, a pipeline fire is expected to burn houses, and not uprooting houses from foundation as it occurred in Lagos, adding that, in view of that, it was beyond pipeline bust, but bomb blast.

Aare Adams stressed that the Ekiti incident was of same pattern, which should not be attributed to ordinary blast, adding that the incidences are becoming rampant in South-West, and therefore need for government not to fold it’s arm, before it get out of hand.

“I was at the Lagos incident, and I am not convince that, it’s ordinary pipeline fire. From history, if there is pipeline incident, fire will only consume building, destroy properties and not pulling down buildings to its foundation. Also on the Ondo State incident, we are not convinced of the Commissioner Of Police submission.

“South-West Governors should be vigilant. Information at our disposal has it that, other South-West states are the next target. Federal government should diligently investigate the incidences”, Adams declared