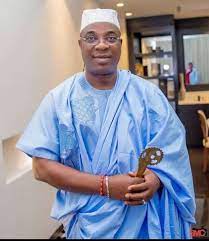 Fuji Star, Kwam1 Undergoes Another Surgery For An Undisclosed Illness

According to K1 Instagram page, it was a minor surgery, but he is still quite grateful to God for seeing him through.

He wrote: “Hmmm. When he sang bobo nogo die unless to ba darugbo, it was like fun… But, it’s becoming a prophecy right now. Minor surgery though, but I still give thanks to almighty God for the success.”

It as scooped that a Canada-based entertainment promoter, Bolaji Saheed Basia who is also a close friend of the fuji music crooner shared K1’s pictures on a hospital bed in the evening of Saturday, July e, 2021.

Bolaji and K1 have been friends for four decades from their days in Agarawu, Lagos Island.

The Fuji king had joined others for an exclusive birthday celebration for his friend on June 25, 2021.

Recall last year, Basia said in a Facebook and Instagram post ps that the K1 surprised him when he paid for a land he (Basis) bought.

Basis wrote, “I called the agent when I didn’t hear from the owner again. He told me the property had been paid for. I asked him why and who? My thought was the owner was playing games with me so that he can increase the price.

“Until he told me it was my friend that paid for it… I called him to thank him and get his account number to refund his money. He told me OMO, THAT WAS YOUR 60TH BIRTHDAY GIFT FROM ME…”
The music superstar has had a few surgical operations in 15 years, some undisclosed.

In August 2019, he went through a procedure after severe pain in the throat. K1 was then treated at Trillium Health Centre, Mississauga, West of Toronto, in Canada.

In June 2018, K1 was reportedly left Nigeria for another medical trip in Canada for respiratory complications.