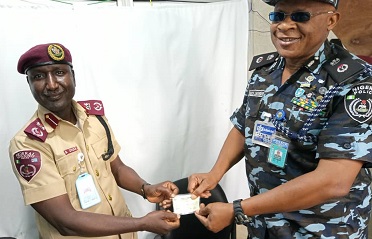 ABEOKUTA: Joint teams of the Federal Road Safety Corps (FRSC) and the Police will soon be deployed to enforce mandatory possession of valid Driver’s Licence by motorists in Ogun State.

The partnership was announced by the State Sector Commander of FRSC, Mr Ahmed Umar at his Ibara, Abeokuta office, shortly after effecting the renewal of Driver’s Licence to the Commissioner of Police, Mr Kenneth Ebrimson.

The Sector Commander of FRSC while presenting a temporary Licence to Mr Ebrimson advised motorists to emulate the Commissioner of Police and update all relevant documents.

He encouraged road users in Ogun State to ensure that they procured valid Driver and Vehicle’s Licences, stating that violators would not be spared by the Crack Teams of FRSC and the Police.

The FRSC boss advised members of the public to avoid fake channels and visit www.frsc.gov.ng or the nearest FRSC Formation on the procedure for renewal of Drivers Licences.

CP Kenneth Ebrimson also described his visit as a demonstration of the partnership between the Commands of FRSC and the Nigeria Police Force in Ogun State.