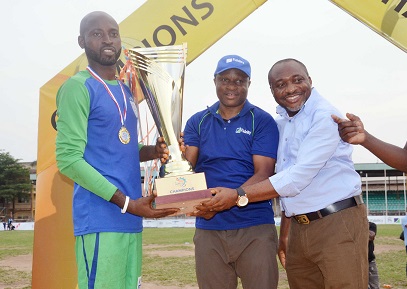 LAGOS: Fidelity Bank Plc has emerged best in the overall medal tables of the 2019 Nigeria Bankers Games (NBG) after they beating UBA at the football competition held in Lagos on Sunday, December 1, 2019.

The match however lived up to its billing as it had everybody sitting on the edge of their seats.

According to a release e-signed and made available to StarTrend Int’l magazine & www.startrendinternational.com by Ejike Ndiulo, Head, Corporate Communication, Fidelity Bank Plc., the Okonkwo tutored boys drew the first blood, converting from a well taken throw-in.

The lead was however short lived as the Tony Elumelu boys benefited from a defensive mix-up to score the equalizer. From then on, it became a ding-dong affair with neither of the teams giving anything away. That was the situation till the end of regulation time.

Then the dreaded penalty shoots-out! This is where you can thump your chest and say yes, “I am a Fidelity Man”.

Fidelity players kept their nerves and true to the Fidelity Spirit, scored all the five kicks to come away with the cup for the fourth time.

Fidelity Bank also emerged best in the overall medal tables of the 2019 NBG.