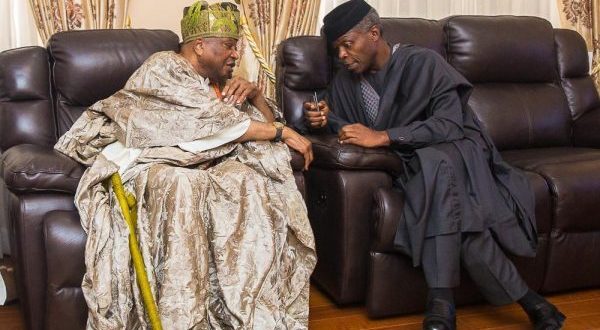 Determined to develop and reinforce effective strategies towards addressing security concerns around the country, the Federal Government has begun a series of consultations with a number of leading traditional rulers with the aim of securing the peace and effective maintenance of law and order across the country.

According to a release signed and made available to StarTrend Int’l magazine & online by Laolu Akande, Senior Special Assistant to the President on Media & Publicity, Office of the Vice President, to this end, President Muhammadu Buhari has asked Vice President Yemi Osinbajo, SAN, to embark on the consultations as the Federal Government with the collaboration of the States is working to significantly improve security in local communities while rearranging the security architecture nationwide.

Prof. Osinbajo dropped the hint today in Ogun State at the take-off of what is expected to be wide consultations with key traditional rulers in the state, and across the country.

Answering reporters’ questions after separate meetings with the Akarigbo of Remoland and the Awujale of Ijebuland, the Vice President noted that the consultations would be done with traditional rulers across the country to ensure peace and security in their communities.

“As you know, there are many significant concerns all over the country; and of course there are concerns also in the South West. So, I’m here on the instruction of Mr. President to consult with the Kayibesi, Governor Dapo Abiodun and other stakeholders on what to do to beef up security, and to generally improve the security architecture,” according to the VP.

After meeting the Awujale, the VP said “of course, you know that the Kabiyesi is not just the traditional ruler, but also a very important part of the government. That’s why we are here to speak with him and to agree on a few modalities for beefing up security, ensuring that we are fully conscious of all that is going on around us, and just to be sure that peace and security reigns here and across the country.

“There are some who might want to cause instability and difficulties, but we are very confident that God helping us, working together as a nation, we will be able to overcome all our problems and set our country on the path of peace and prosperity,” he noted.

The Vice President further said the Federal Government, in collaboration with State Governments, has taken significant steps to improve security, while there would be further consultations with the traditional rulers.

Prof. Osinbajo noted that the governor of the state was committed “to ensuring there is peace and security and that everyone who lives in all our neighbourhoods, localities and communities live in peace with each other and that we maintain a high level of security.”

On the nationwide consultations with traditional rulers to improve security in their respective communities, the VP said, “we are consulting with many of the traditional rulers all across the country. But there are concerns in the South West. I’ve started here in Ogun. We are also going to be in Osun State on Tuesday. We are also going to go round and see several other traditional rulers. Primarily, they themselves want to participate. We’ve spoken at various times and they want to participate in improving the security architecture.” 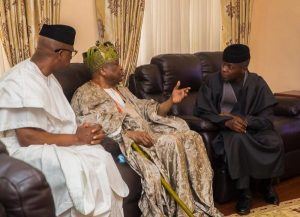 “One of the things that Mr. President has spoken about is the role of traditional rulers in maintaining peace and security in their own locality. As you know, they are the closest to the grassroots, to their communities. And one of the critical things that we expect is that even with our community policing efforts; we expect that there would be some interventions between the traditional rulers, the community police and some of the other efforts that they are making to improve intelligence to understand what is going on. We need to know who is where and what exactly is happening all around, so that these can then be transmitted to the security agencies.”

The Vice President would continue on the consultations early next week.

Publisher and Editor in Chief - Magazine and Online Tel: 08038525526 - 08023339764 - 08055657329 Email: startrendinter@gmail.com
Previous How Two Teenagers Allegedly Disfigured And Murdered Their Friend Because ‘She Was Too Attractive’
Next Day OBJ Prostrates To New Agura Of Gbagura-Elect