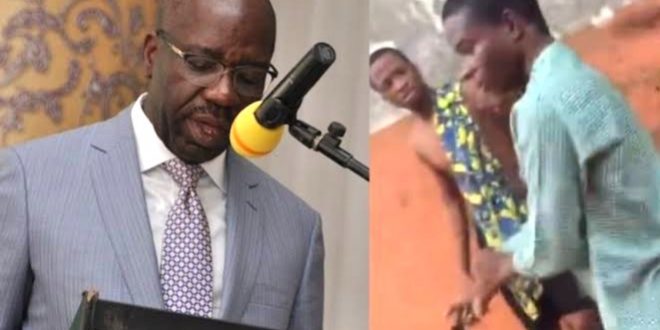 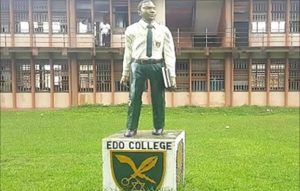 BENIN CITY – The Edo State Government has suspended the Principal of Edo College, Mr. Peter Edomwonyi over the maltreatment and abused of a student of the school that recently went viral on social media.

According to a release e-signed and made available to the media by Osarodion Ogie Esq., Secretary to Edo State Government, the estranged principal has been instructed to proceed on suspension effective immediately while he is to hand over all property and assets of the school in his possession to the next most senior Vice Principal of the school.

He is to remain on suspension until the investigation of the incident is concluded and government provides further directive on the matter.

It was learnt that the Edo State government watched with disdain the disturbing video that had gone viral of the abuse by students of Edo College, Benin City, the Edo State capital.

The State Ministry of Education on enquiry discovered that the incident took place at the college premises and involved Senior Secondary School (SSS) students of Akenzua Hall of residence, who are writing their National Examinations Council (NECO) final examination.

The disturbing video exposed the incompetence of the management of the school authority and the delinquent behaviour of the students who carried out the abusive action.

On account of the above, government has taken the following actions:

1. The Principal of Edo College, Mr. Peter Edomwonyi, has been instructed to proceed on suspension effective immediately. He is to hand over all property and assets of the school in his possession to the next most senior Vice Principal of the school. He is to remain on suspension until the investigation of the incident is concluded and government provides further directive on the matter.

2. The House Master for Akenzua Hall of Residence, Mr. Oamen Stanley, has also been suspended indefinitely, with immediate effect.

3. All the students involved in the abusive behaviour have been handed over to the Ministry of Justice for investigation and prosecution in accordance with the Child Rights Law.

4. The Edo State Ministry of Health is reaching out to the victims to ascertain the state of their health and provide the necessary support.

The Edo State Government is committed to maintaining a school environment that is safe for children and offers apologies to the victims of the abuse, their parents and members of the public.

Some senior students of the elite Edo College, Benin, Edo State (names withheld) have been suspended for mercilessly brutalizing a junior student of the same school.

It would be recalled that in a recent viral online video, the senior students were seen severely whipping the helpless student with belts after which they came down heavily on him with blows and side kicks.

In the video, the junior who was naked and on his knees, bleeding, passionately pleading for mercy from his assailants who were apparently unmoved as they continued with the brutality.

With dirt all over his body, the victim who was covered in blood, writhed in pains as the senior students who did not betray any emotions continued with the whipping, kicking and cursing.

Speaking on his mobile phone, the principal, Mr. Peter Edomwonyi disclosed that the beastly students that were involved in the merciless acts have been identified, noting that the Ministry of Education has placed them all on indefinite suspension pending the outcome of investigations.

Edomwonyi explained that in the course of investigations officials from the ministry, they will ascertain whether the assault was cult related or not.

He said: “I am presently at the Ministry of Education over the matter. It’s true that some senior students brutalized a junior student. The ministry is looking into it but in the meantime, the erring students have been placed on indefinite suspension. The panel has been mandated to ascertain whether the beating was secret cult related or not.”