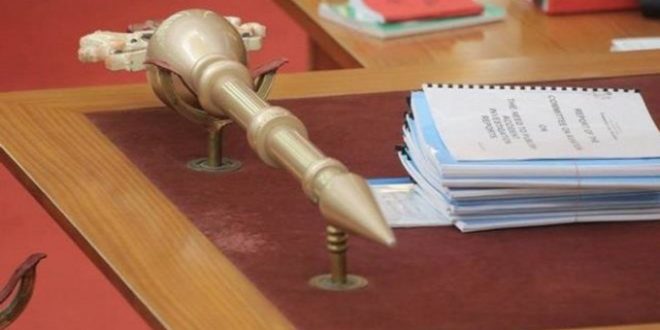 Drama As Imo Speaker Flee With Mace, Gets Suspended

StarTrend May 16, 2019 HEADLINE, NEWS Comments Off on Drama As Imo Speaker Flee With Mace, Gets Suspended 9 Views

Twenty-one out of the 27 lawmakers of the Imo State House of Assembly on Wednesday suspended the Speaker, Acho Ihim.

The suspension of Ihim came after he had adjourned the ongoing plenary and escaped with the maze after reading a letter announcing the lifting of the suspension placed on the 27 Local Government chairmen by the state lawmakers last week.

The 21 lawmakers immediately announced Chiendu Offor (Onuimo) of the Action Alliance as the interim Speaker.

They also announced the suspension of the Majority Leader of the House, Lugard Osuji; and elected Lloyd Chukwuemeka (Owerri North) in his place.

The Acting Speaker who later addressed journalists said that the 21 lawmakers had served impeachment notices on Ihim and Osuji.

Ihim, in a bid to frustrate his colleagues from removing him, had allegedly ordered his aides to switch off the generator supplying electricity to the complex, but the visibly enraged lawmakers went on to impeach the two principal officers.

Trouble had started after the lawmakers raised objection to the letter announcing the lifting of the suspension of the 27 LGA chairmen.

The lawmakers were seen putting final touches to the impeachment notices as of the time of filing this report.

Previous We Are Not Part Of Abiodun’s Victory, PDP Declares In Ogun
Next Daddy Showkey Begs EFCC to Pardon Naira Marley