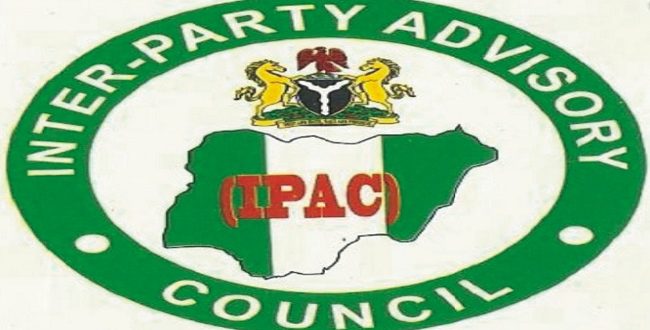 ABEOKUTA – The Inter-Party Advisory Council (IPAC), Ogun Chapter has drawn attention of the people against Mr. Olamiposi Ogini, allegedly parading himself as Chairman of the Council, stating that he should be disregarded by all.

In a statement signed by the State Chairman, Asiwaju Adedamola Abdu-Lateef, and made available to newsmen in Abeokuta, on Saturday, October 17, 2020, said that he remains the state Chairman until the expiration of his tenure.

The statement read in parts, “My attention has been drawn to claim by one Olamiposi Ogini, parading himself as the Chairman of the Ogun State chapter of Inter-Party Advisory Council (IPAC).

“This is to outrightly notify all stakeholders, members of our group, the good people of Ogun state and the press that I, Adedamola Abdu-Lateef remain the authentic Chairman of IPAC in the state until the expiration of my tenure, come December, which is just in two months time.

“My emergence as the Chairman was not by proxy or selection, but by due election at the Ogun State INEC office in December 2019  by the amiable and ever patriotic members of the council. So, the claim by Ogini that he is the number one IPAC member in Ogun state should be disregarded.

“Let me also stress that the claim is a deliberate attempt to distort the peace and tranquility of IPAC and to create unnecessary rancour among our members, which in turn could drag the council into an awful state of jeopardy”

While referring to Ogini as an impostor, Abdu-Lateef, in the statement added that “the man is not fit to be a leader within the State Council.

“Ogini is just an impostor by definition and that alone paints him unfit to qualify as a leader because a man with questionable characters is not worthy of the feat. Moreso, the kind of politics being practiced in Ogun state does not accommodate a cretin like him in a leadership position”

He added, “Ogun state is known nation-wide for politics based on truth and transparency and Ogun people are not known for politics that attacks stakeholders, political leaders, State governor as do Ogini. That is not the kind of politics we are known for. It is only an alien like Ogini who has no respect for elders that we can trace to such in IPAC.

“Ogun state is one state that is politically sophisticated and one alien from Ilesha in far away Osun state cannot come here and start distorting our politics.

“I must say that Ogini is not even qualify to be a councilor not to talk of leading the umbrella of political parties in Ogun State”.

The State Chairman however reiterated that he is the authentic Chairman of IPAC in the State.

“I must reiterate finally that I, Adedamola Abdu-Lateef remain the authentic Chairman of IPAC in Ogun State”, he stated.