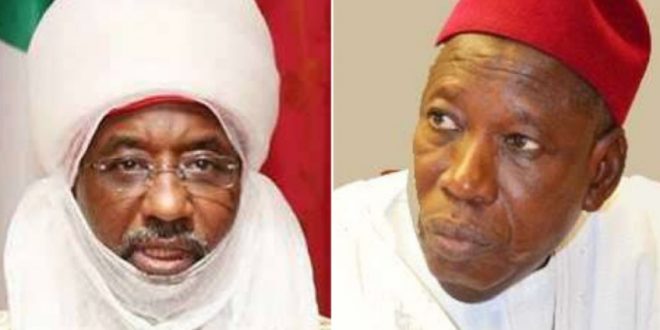 Idowu Hamed May 17, 2019 HEADLINE, METROLINE Comments Off on DECENTRALISATION OF KANO EMIRATE 39 Views

The old Kano state had four Emirates: Kano, Hadejia, Gumel and Kazaure before Jigawa was carved out in August 1991.

To monopolise the Kano Emirate, Hadejia, Gumel and Kazaure were manipulated to be in Jigawa state, even though Kazaure is more Kano and more closer to Kano than even most parts of Jigawa, especially the capital Dutse.

That was how Kano remain a single Emirate with the control of 44 local governments.

This is another reason Kano city most of the times become congested during Sallah festive periods because all the traditional tittle holders and District Heads from all the villages troop into Kano to pay homage to the Emir and to perform traditional rites.

Some of the old traditional districts of Kano are Gaya, Karaye and Rano, with District Heads almost equivalent to the status of second class Emirs, but the influence of central kingdom diminish and reduce them into just Heads of their communities. Gaya for instance is believed to be the origin of a man named Kano who first settled in the present Kano State on his search for ironstone.

Gaya served as an important terminus of a migratory corridor through which there was an influx of immigrating peoples especially from Eastern Sudan, the Maghrib and the Middle East. The traditional ruler of Gaya is known as the Sarkin Gaya.

If traditional leadership and kingdoms have any significance in the development of communities, then creation of more kingdoms would inevitably contribute to that.

But other factors need to be considered in creating more liabilities to the government. How to finance the Emirates in this time of scarce resources is another thing.

Former Kaduna Governor Makarfi created many Chiefdoms and Kingdoms in Kaduna, but some of them have been neutralised by Governor El-Rufa’i because the state cannot continue shouldering their expenses. Though the decentralization of Kano Emirate is motivated by political thirst to persecute political opponents, some Kanawas are celebrating it.

Whatever, it is aimed at reducing the influence of Emir SLS who turned himself errand in opposing the government of Ganduje.

The constitution we operate under gives more powers to even the LG chairman than the traditional ruler of the state.

In Kano for instance, the Chairman of Kano Municipal LG is more powerful and protected under the constitution than the Emir of Kano.

As such, political office holders can at any time they so wish manipulate how the kingdoms operate. If this is the case, then the Emir was wrong to always disagree with the constituted authority or even engage in political dispute with Governor Ganduje.

I foresaw this, or even his removal when, in the presence of Governor Ganduje the Emir was making comments that may turn the Governor sad. Emir SLS should have learnt from what happened to him at the CBN. Is not everything you talk.

According to wise sayings, “if you can’t beat them, join them”. Everyone knows Emir SLS is so much in love with traditional powers, hence the reason he lobbied for it.

And based on this, the only weapon in the hands of Ganduje to punish Emir SLS for his unguided utterances against his government is to strip him off powers or reduce his influence.

There is difference between traditional leadership and politics, especially the one being done in Nigeria. Politicians don’t like unnecessary attacks every now and then. You either advise them privately or keep mute.

Late Emir Ado Bayero was never like this, he never interfere in politics. He maintained his royalty and dignity by been father to all.

But if I were Emir SLS, I will resign, because they may eventually dethrone him and appoint someone to oversee the kingdom.