Yemi Since (3rd from left) in a group photographs with L-R, Comes Demola Babalola, Mr. Seyifunmi Odunuga (SeyiChicago) and others on the occasion. 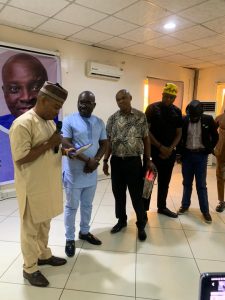 It was an epoch-making event as Yemi Sonde popularly called “Jigan Akala” signed off on all radio & television stations he has presented on for 32 years of his sojourn in the Broadcasting Industry.

The “Thank You Lunch” which was held at Mauve 21, Ring Road Ìbàdàn on Wednesday January 5, 2022 featured goodwill messages from friends and colleagues in the broadcasting industry, presentation awards and lunch for guests present at the event.

Some respected organizations also used the opportunity of the The Thank You Launch to appreciate the Radio Icon with different awards presentations.

Yemi Sonde in return presented a “THANK YOU” award to Splash FM Ibadan for being a dependable ally which was done in company of some notable media icons.

The “Thank You Lunch” and “Bowing Out to Refire” are what people termed as “koseleri” in the history of broadcasting industry, and this made Yemi Sonde – Jigan Akala to be a trailblazer among his colleagues. Yemi Sonde who also extended his appreciation to the house of the founder of West Midlands Communications, owners of Splash FM Ibadan, Lagelu FM and Splash FM Abeokuta for the platform given to him to air his programmes for 15 years.

Oloye Lekan Alabi the Eekarun Olubadan however prayed for Yemi Sonde and the breakthrough for Yes FM Ibadan.

The “Thank You Lunch” was anchored by the duo of Ṣeun Akinola and 13th Disciple while the highly respected DJ AY dished out nice music to the admiration of the guests who were thrilled with sumptuous meals served with assorted drinks.