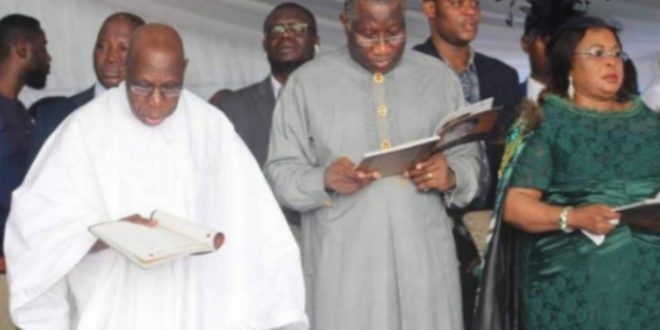 Both leaders were in the town to attend the burial of the father of Governor Emmanuel Udom, Elder Gabriel Nkanang.

Dr Jonathan the shared the photo of himself and his wife, Patience, standing with former President Obasanjo on his verified Facebook page.

Chief Obasanjo, who ruled the country as military Head of State between 1976 and 1979 before returning as civilian leader between 1999 and 2007, has been active in the political space.

Chief Obasanjo initially supported the presidential bid of Dr. Jonathan in 2011, but later parted way with his protege.

During the 2015 presidential elections, Chief Obasanjo openly campaigned against Dr. Jonathan after tearing off his membership card of the ruling Peoples Democratic Party (PDP)