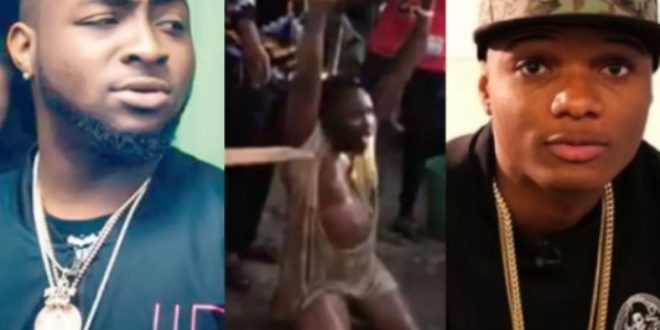 Idowu Hamed May 10, 2019 ENTERTAINMENT, HEADLINE Comments Off on Davido Proves He Is Bigger Than Wizkid After Doing This to Man Who Was Severly Beaten By Wizkid’s Thugs 91 Views

Currently making rounds in the news is a viral video which sparked outrage and concern among fans and loyals of the music duo, Davido and Wizkid.

The video showed a Davido fan getting the beating of his life from thugs said to be affiliated to singer, Wizkid.

According to Gistmania, Nigerian superstar and singer, Davido gave the fan identified as Shoki Shitta the sum of N1million Naira after he was brutally dealt with by Wizkid’s thugs for allegedly disrespecting Wizkid.

The video showed Shoki Shitta and his goons disrespecting Wizkid and praising Davido because of an alleged non-settlement by Wizkid.

Another video which has surfaced has shown Shoki Shitta begging and taking his words back.

Previously, Shoki Shitta could be heard telling a group of his gang members who were playing a Wizkid track to switch it to Davido.

What many are asking now is this, will this cause another rift between the 2 artistes. Davido and Wizkid were known to be at loggerheads with each other in the past.

Their beef lasted for quiet a while before the two decided to thrill fans by reconciling and singing together at an event.

Right now we hope another war between Davido and Wizkid doesn’t occur because of this misunderstanding.