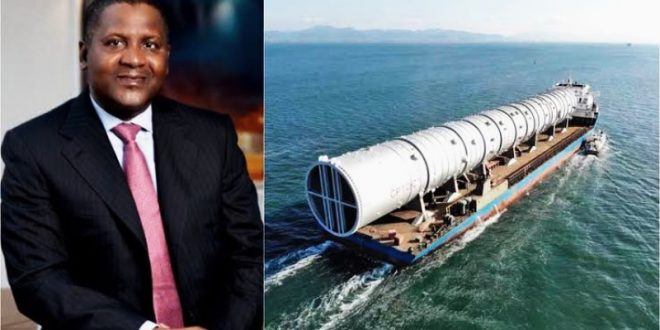 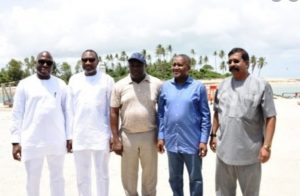 LAGOS: World’s magnificent engineering masterpiece, a single train crude distillation column which is expected to be used by Dangote Refinery as the primary unit to process crude oil into fuels has arrived in Nigeria, recently. 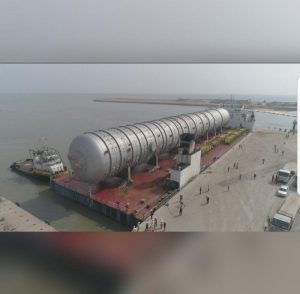 Recalled, Sinopec China had on July 29, 2019 announced the departure of the atmospheric tower from a wharf in Ningbo, China to Nigeria.

Dangote Refinery is an oil refinery owned by the Dangote Group which is under construction in Lekki, Nigeria, and when completed, it will have a capacity to process about 650,000 barrels of crude oil per day. 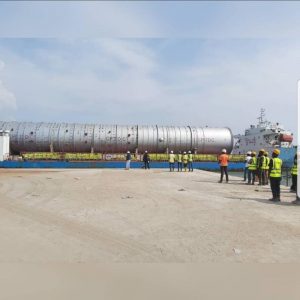 Nigerian businessman Aliko Dangote unveiled early plans for the refinery in September 2013, when he announced that he had secured about $3.3 billion in financing for the project. At the time, the refinery was estimated to cost about $9 billion, of which $3 billion would be invested by the Dangote Group and the remaianing amount comes through commercial loans, and begin production in 2016.

However, after a change in location to Lekki, construction of the refinery did not begin until 2016 with excavation and infrastructure preparation, and the planned completion was pushed back to late 2018. 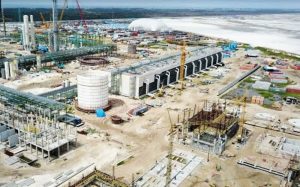 In July 2017, major structural construction began, and Dangote estimated that the refinery would be mechanically complete in late 2019 and commissioned in early 2020. According to Reuters, citing sources familiar with the project, construction was likely to take at least twice as long as Dangote publicly stated, with partial refining capability not likely to be achieved until 2022. An associated project at the site of the refinery, a urea fertilizer factory, is scheduled to begin operation in late 2018 and produce about three million tons of urea annually. 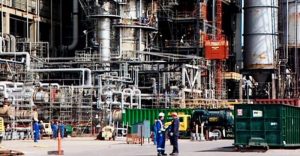 The refinery is situated on a 6,180 acres (2,500 hectares) site at the Lekki Free Zone, Lekki, Lagos State. It will process about 650,000 barrels of crude oil daily, transported via pipelines from oil fields in the Niger Delta, where natural gas will also be sourced to supply the fertilizer factory and be used in electrical generation for the refinery complex.

With a single crude oil distillation unit, the refinery will be the largest single-train refinery in the world. 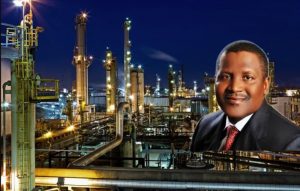 With a greater capacity than the total output of Nigeria’s existing refining infrastructure, the Dangote Refinery will be able to meet the country’s entire domestic fuel demand, as well as export refined products.