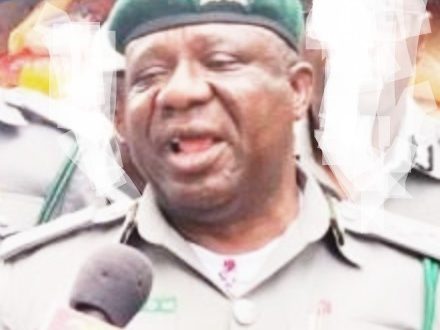 According to a release signed and made available by Abdullahi Maiwada, Public Relations Officer, for: Customs Area Controller, Ogun Area I Command, the release stated that, “On Monday, 07th October, 2019 at about 1330Hours, Officers of Nigeria Customs Service Ogun Command on routine patrol arrested a vehicle (Mercedes Benz ML) suspected to have been smuggled into Nigeria.

“In the process of conveying the said vehicle driven by an Officer of the Service fully escorted by official patrol vehicle, an okada man conveying a passenger crossed their path. In a swift response by the driver to avoid collusion with the said okada rider, he lost control and rammed into some group of people coincidently on a market day of Ihumbo Community.”

The stated further said, “Unfortunately one of the victims a twenty years old student of Ojumo Community Secondary School by name Opeyemi Odusinan instantly died and three people sustained various degrees of injuries. As at the time of filling this report, two of the injured have been discharged with only one Sunday Adeniyi (Adult male Nigerian) receiving treatment at General Hospital Idiroko.

“It is on this premise that the Command wishes to register its deep heartfelt condolences to the family, school and friends of this young and promising child who lost his life in this unfortunate circumstances. We strongly commiserate with you in this trying moment and it is our prayer that God will give you the fortitude to bear this irreparable lost. The Command is also working assiduously to carter for the injured and to cushion the effect of this unintentional tragedy.”

The command however condemn “some mischief makers who hijacked the situation and attacked Customs vehicles within sight in a community known for upholding peace and rule of law.”
Meanwhile, Normalcy has since been returned with the intervention of Police, Military personnel and other sister security agencies.

“Finally, we wish to reiterate our sincere sympathy as this is purely an accident and not the narrative of stray bullets or pursue as insinuated by some citizen journalists and a section of the traditional media,” the release concluded.