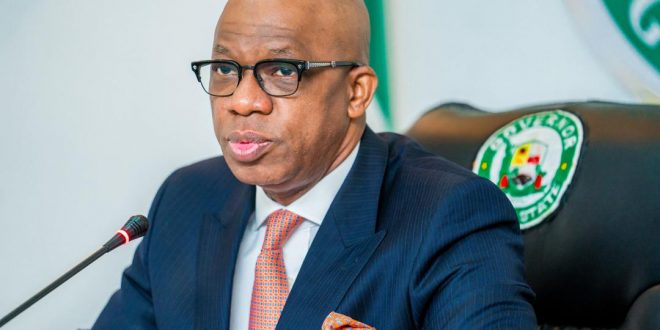 ABEOKUTA: As part of efforts aimed towards combating the Coronavirus in Ogun State, a special welfare package has been put in place for frontline health workers, who are daily exposed to the deadly virus in the course of treating their patients.

According to a press release e-signed and made available to StarTrend Int’l magazine & www.startrendinternational.com by Kunle Somorin, Chief Press Secretary to the Governor of Ogun State, the State Governor, Abiodun stated this while updating newsmen on the fight against COVID-19 at his Iperu home, Ikenne Local Government Area, said other new measures included identifying and enrolling of specific private hospitals as incident centres and first responders, to check people for symptoms and report to epidemiologists, for prompt action.

Prince Abiodun said staff of such private health facilities would be trained on COVID-19 management and provided with personal protective equipment (PPEs) an they would complement the over 500 government health facilities in providing services to the people.

According to the Governor, “we have concluded plans to take possession of a Mobile Testing Laboratory to complement the fixed one at OOUTH, Sagamu. The mobile laboratory will be sent across the State and deployed in areas with large population and random testing carried out to access the prevalent rate in the State.

“We are establishing dry throat testing facility where people can go and be tested. This will help us in identifying the positives that we have in the State,” he noted.

The Governor revealed that the State has two new cases, who reside in Obafemi-Owode and Yewa South Local Government Areas, saying with the new cases, the number has risen to six from the first case, adding that of these, three have been discharged and one was responding to treatment and was in the verge of being discharge.

Commenting on the distribution of relief food items which started over the weekend, Prince Abiodun applauded the people for their peaceful conduct, emphasising however that food items were meant for the elderly, poor and vulnerable.

“I want to enjoin those who have not received to be patient. The exercise is an on-going process and is in phases. A pack is meant for a household and not for a street, group or Community Development Association,” he clarified.

The Governor, who spoke against politicising government efforts at containing the virus, maintained that government was battling a pandemic that was causing havoc all over the world.

“We are battling with a pandemic that is sweeping the whole world. This is not the time for politics, it is not time for games, it is not a time to throw political yaps. We will not be distracted by those who are bent on distracting us,” Prince Abiodun vowed.

He urged the people to protect themselves and their communities against the dreaded virus, by observing all the guidelines and avoid carefree attitude by constantly having in mind that COVID-19 was real, was in the State and was no respecter of location or social status.

While specifically commending health workers for putting their lives on the line, the Governor acknowledged their uncommon commitment, vigilance and professionalism, saying that his administration would continue to review measures and strengthen preparedness on a regular basis, to combat the virus.

Let me start by commending all the residents of Ogun State for their cooperation, understanding and compliance with the stay at home order occasioned by the corona virus pandemic and came into effect on Friday. Your sacrifice in the cause of protecting ourselves and our state from the dreaded virus is in the interest of all of us and is greatly appreciated.

I reaffirm the commitment of this Administration to the welfare of the citizenry at all times. The commitment to the welfare of residents of the state is why we delayed the commencement of the total lockdown in the state to Friday, and why we also gave the window of suspension of the lockdwown from 7.00am to 2.00pm every 48 hours. The lock down will be lifted tomorrow Tuesday 7the April from 7am – 2pm to allow residents buy food items and drugs, and earn some bit of living, especially for those who earn their living on a daily basis.

However, as you take advantage of the window of suspension of the lockdown, from 7.00am to 2.00pm tomorrow and the subsequent windows every 48 hours, you are required to observe social distancing guidelines, wash your hands with soap and water regularly or use a hand sanitizer and wear a face mask when you come out in the public. Those who do not have any pressing need to come out should stay home, even during the window of suspension of the lockdown.

I wish to also applaud the orderly conduct of the people during the distribution of relief food items which commenced over the weekend across the state. It is important to emphasise again that the priority target is for the elderly, the poor and the vulnerable households who are expected to receive a pack of the seven food items each as earlier announced. The exercise is an on-going process and in phases. I wish to therefore enjoin those who have not received to be patient as the items would get to them in due course.

It is worth emphasising for the umpteenth time that each of the pack of seven food items is meant for a household of the elderly, the poor and the vulnerable and not for any street, group, or Community Development Association to unbundle and start sharing the items in bits and pieces. This will defeat the purpose of the palliative. In the first phase, between 250-300 households are targeted in each ward, and distribution will continue in phases until 1,500 to 2,000 households reach is achieved in each of the 236 wards in the state, approximating to about 2.5 -3 million citizens.

The fight against corona virus is a relentless one and the reality of it stares us in the face with increasing figures of the number of positive cases and deaths globally and even on our shores. And today, I have the unpleasant task of announcing two new positive cases in Ogun State today, bringing the total to 6 from the index case identified late February. Though out of the 6 cases, three have been discharged and one is also responding to treatment and on the verge of being discharged, the two new cases may be erroneously considered few but certainly very significant. One of the case is from

Obafemi-Owode Local Government in Ogun Central whilst the other is from Yewa South in Ogun West, thus each of the three senatorial districts in the state has one case at least. This is significant, particularly when the two new cases have no recent travel history or close contact with any positive case with travel history. Indeed, one of them is from Mowe, a border town with Lagos State. They have since been moved to one of our isolation centres in the state. It is therefore important for us all to protect ourselves and our community from this invisible but dangerous virus by observing all the guidelines and shed off any carefree attitude that some may have been adopting toward the virus. COVID-19 is real. It is here also in Ogun State.

As an Administration, we consider it expedient to unveil new measures to combat the spread of the corona virus pandemic and these include:

We will continue to review the measures and strengthen our preparedness to combat the corona monster on an on-going basis.

Our health workers have demonstrated uncommon commitment, vigilance, professionalism and rear sacrifice to rise up to this historic moment. We owe them a debt of gratitude and we must put them in our prayers for their own safety in the discharge of their critical duty to save the lives of others. However, we must do more than that. This is why we are have put together a special welfare package to cover them. It does not equate their service but it is at least a token for them to know we care about them as they go about giving health care to others and provide some succour for them and their families.

We want to particularly thank all those who have donated to this cause in cash and in kind Winners Indomie Honeywell Kessington Adebutu Dangote Archbishop Fape /Anglican Communion Leadway FCMB Tony Elumelu Baptist Convention Fidson Pharmaceuticals Senator Ibikunle Amosun Senator Tolu Odebiyi and all those who have sent cash donations using our USSD from the N950 to the N2,000 it all adds up and we are very grateful.

Once again, I thank the good people of Ogun State for their cooperation and compliance; our health team, for their dedication; our donors, for their kind generosity; our stakeholders, for their support, security agencies for their vigilance and civility, and members of the State Task Force that have been working with me round the clock to provide leadership to the state efforts.

We will stop at nothing to stop COVID-19 in its track in Ogun State.

I thank you all for listening, and God bless.