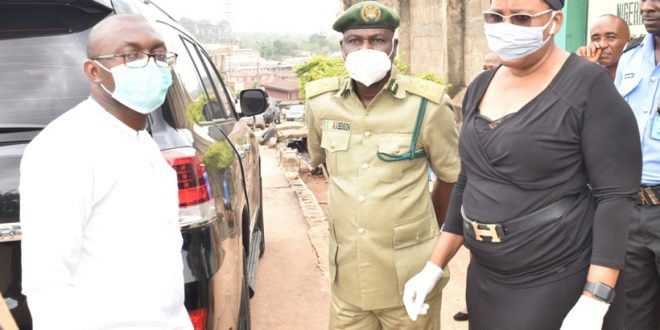 ABEOKUTA: Chief Judge of Ogun State, Justice Mosunmola Dipeolu, has ordered the immediate release of 249 prisoners from five Correctional Centres across the state, in an attempt to decongest the facility and avert the prisoners from being contacted the Coronavirus.

Dipeolu said that the release of the inmates was based on the federal government’s decision to decongest the Correctional Centres in a bid to contain the spread of Covid-19, noting that those released were men and women with cases ranging from stealing, burglary, assault to bodily harm and other minor cases.

She said the congestion would improve social distancing measures, thereby reducing the spread of the virus at the Correctional Centres, urging the released inmates to go back to the society and be useful for the entire nation and refrain from sinful acts.

She said that some inmates awaiting trial ought not to remain in custody where matters for which they were charged for was not murder or armed robbery were also considered, adding that where it was discovered that the prosecution of the cases were moving at slow pace or not heard at all for one reason or the other were also pardoned.

While addressing Journalists, the state Attorney-General and Commissioner for Justice, Mr. Akingbolahan Adeniran said that the federal government had so far released 2,600 inmates in various prisons across the country to curb the spread of coronavirus.

Adeniran said “the governor did this in line with federal government directive to decongest the prisons following the outbreak of the deadly Coronavirus disease which currently ravaging the entire world, so that it won’t escalate in the country”.

He further stated that the idea of social distancing which was being preached in the country, as well as in the state may not be attained if the Correctional Centres in the state were not decongested.

“You see, the social distancing will not be attained because of the way the inmates are arranged at these Correctional Centres, and I urged the convicts so pardoned to be accepted by their relatives, villages and families”, Adeniran said.

Publisher and Editor in Chief - Magazine and Online Tel: 08038525526 - 08023339764 - 08055657329 Email: startrendinter@gmail.com
Previous Ogun To Treat Applicants For CBN-NIRSAL Covid-19 TCF On First Come, First Serve Basis
Next DiamondXtra: Access Bank Rewards Customers In Trying Times As 10 Lucky Amongst Them Get N1 Million Each