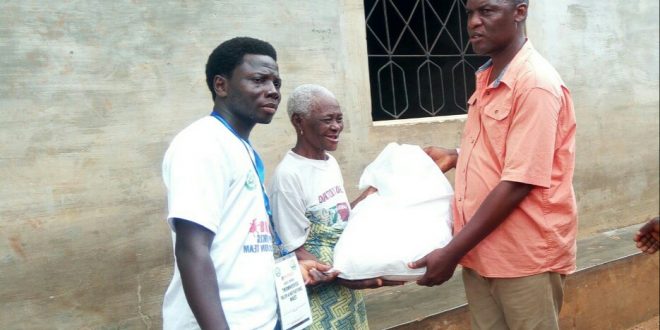 Hon. Akinsanya (right) presenting a pack to an aged woman. 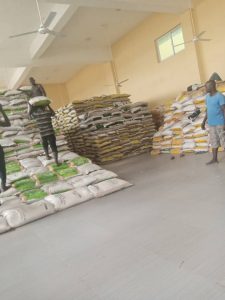 IKENNE: The Chairman Transition Committee of Ikenne Local Government, Hon. Rotimi Akinsanya, has commended the State Governor, Prince Dapo Abiodun, for his outstanding efforts to curb the spread of Coronavirus, as he received 2,500 packs of food items, allocated to the LG, by the state government. Each of the pack, however, contained kilograms of rice,beans, gari, litres of vegetable oil and sachets of varieties of condiments.

According to a press release e-signed and made available to StarTrend Int’l magazine & www.startrendinternational.com by Adenusi Oyebola, Information Officer, Ikenne LG., the Chairman, who had, earlier, constituted the committee that would handle the distribution, swung into action by allocating the items to major towns like Ikenne, Ilisan, Iperu, Ogere & Irolu, which were further divided to various political wards for easy distribution.

He, thereafter, directed each member of the LG Transition Committee to 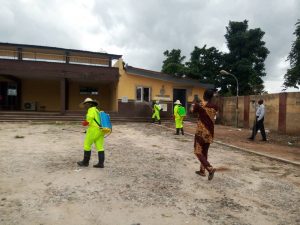 work with the committee.

In the meantime, Hon. Akinsanya had disclosed that he was optimistic that the era of Covid-19 would soon be over, with the inestimable collaborative efforts of both state and local government, including public spirited people.

He stated this when he led a team of health workers, members of Transition Committee, ,top civil servants and the representative of the Babcock University, Prof. Owolabi Sunday, to fumigate Ogere toll gate, Ikenne town hall & market, assuring the people that the fumigation exercise would be a continuous one, as the occasion demanded. 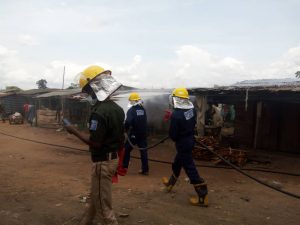 The LG helmsman finally appreciated all the various philanthropists and private institutions like Babcock University, for donating in cash and kind to the poor and the aged, particularly, an unnamed person that doled out cash to 2500 people, in order to ameliorate negative impact of the on going stay at home directive.

He, therefore enjoined others to emulate the kind gestures, as the government can not do it alone.