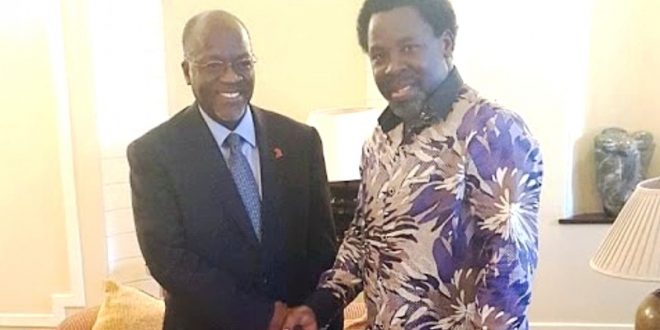 Prophet Joshua and his friend President Magufuli of Tanzania

COVID-19: God Has Responded To Our Prayers – President Magufuli

Idowu Hamed May 18, 2020 HEADLINE, NEWS, RELIGION Comments Off on COVID-19: God Has Responded To Our Prayers – President Magufuli 40 Views

Tanzania President John Magufuli has said that the number of coronavirus cases in his country had dropped drastically, saying thanks to the populations’ prayers.

Magufuli stated this on Sunday, May 17, 2020, adding: “We started with God and we will finish with God. Looking at what is going on in our hospitals, it’s obvious that God has responded to our prayers.”

The country’s National Television broadcast Magufuli’s comments from a church in his North-Western hometown of Chato, on Lake Victoria where he has been since March 28, 2020.

Magufuli cited several examples of improvement, notably at the Amana Hospital in Dar-es-Salaam, where the number of patients reportedly dropped from 198 to 12. In the town of Lulanzi, the previous number of 50 patients had fallen to 22, the president added.

“As things go, we can plan another three days of thanking God for the outcome… probably from next Friday,” he said.

The President also said on Sunday that one of his children had contracted coronavirus and had recovered, saying, “Thanks to his use of hot water with lemons.”

His son’s ‘healing’ further highlights the close relationship of Magufuli with prominent Nigerian cleric TB Joshua, who recently advocated the use of hot water with lemon for good health.

Recall, Magufuli visited Joshua’s popular church in Lagos several times prior to his ascendancy to power and his wife Janeth was among the thousands in attendance at the cleric’s crusade in Nazareth, Israel in June 2019.

During the service, Magufuli asserted his intentions to reopen universities and authorise sports events if the number of cases continue to decline. He added that plans to quarantine tourists could also be relaxed next month.

Tags COVID-19: God Has Responded To Our Prayers – President Magufuli#