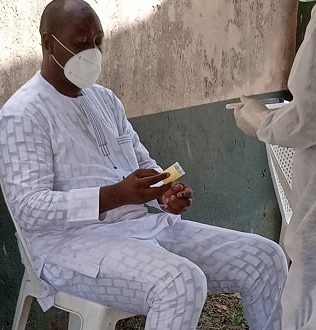 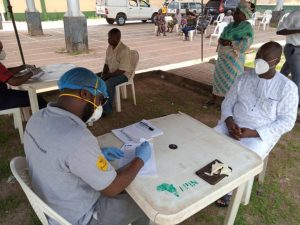 EPE LG, LAGOS: The Executive Chairman, Epe Local Government Area, Hon. Adedoyin Adesanya has said that it was imperative for the residents of the local government area to provide their blood sample for test for Coronavirus at the newly set up Covid-19 testing centre in Epe, Lagos State.

Adesanya made this known while providing his blood sample for the Medical Officers, at the Covid-19 testing centre, at Epe Primary Healthcare Centre, Ita-Opo, Epe, Lagos state.

The LG boss said that, he willingly surrendered himself for testing to encourage the residents, so as to take a cue, noting that it was important to voluntarily do same in order to be infected others or being contracted by another person.

“Though, no index case of the virus in Epe local government area as am talking to you, but we need be cautious and undergo the test in order to ascertain our status and also to have clear of mind, I believe that none of us in this local government area will be contacted or infected”, Adesanya said

He implored the residents to come out en-masse to be tested and not to stigmatizing those whoever tested positive, noting that tested positive was not a death sentence, but to be attended to as early as possible.

The Medical Officer of the Health and Head of the Centre, Dr. Nurain Ayeola, appreciated the state government for decentralizing the testing centres, noting that it would greatly help in contact tracing and help to curb community transmission of the virus. 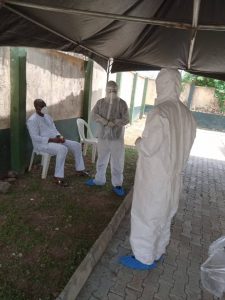 He urged the residents of these areas with symptoms, such as coughing, sneezing, difficult breathing etc, to visit the centre for sample collection and testing.

It would be recalled that last week, that the Lagos State Government had set up sampling stations in each of the 20 Local Government Areas of the state where blood could be collected for testing.

While giving the hint on Sunday, April 19, 2020, then, the Commissioner for Health, Prof. Akin Abayomi, stated that the strategy was geared towards bringing Covid-19 testing centres closer to the people in their localities.