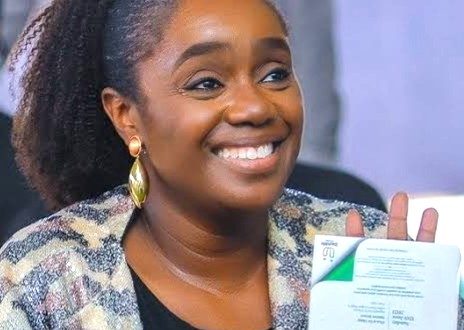 ABUJA – A Federal High Court in Abuja on Wednesday, July 7, 2021 has ruled that former Minister of Finance Mrs. Kemi Adeosun was ineligible for national service.

According to the ruling, the constitution does not require her to present her first-degree certificate or any other certificate, including the NYSC certificate, to be appointed a minister.

The court, presided over by Justice Taiwo Taiwo ruled that the ministerial appointment of Adeosun was not illegal, neither was it unconstitutional, even without presenting the NYSC certificate.

In its ruling on a suit for constitutional interpretation filed at the court in March 2021 by the firm of Chief Wole Olanipekun, SAN, on behalf of Adeosun, the court said since the 1979 constitution, which was in force at the time did not recognise dual citizenship, Adeosun could not have served because she was a British citizen.

Adeosun graduated from the University of East London in 1989 at the age of 22.

The court ruled that Nigeria citizenship only reverted under extant constitution by which time Adeosun was well above 30, and by the court ruling ineligible to participate in NYSC scheme as the scheme is exclusively reserved for Nigeria.

The court granted all reliefs sought by Adeosun’s counsel.

Responding to the ruling, Adeosun’s lawyers said, “Today’s ruling vindicates my client. The court has made it clear that at the time she presented for public service starting from 2011 up till 2015, she was not required to perform the NYSC under the 1979 Constitution, since client graduated in 1989.

“Throughout client’s travail which lasted 69 days, client was never in doubt about her innocence.

“Client chose to resign on September 14, 2018 because client did not want the case to become a distraction to the government and the public. Client also believed it would give her the opportunity to vigorously pursue a constitutional remedy to the end, to clear her name.

“Client wishes to state, without equivocation, that in light of all that happened, she is exploring other remedies within the law and will take the appropriate steps at the right time.

“The 69 days of her travail and the years following that have taken a great toll on client’s reputation and caused client’s family deep grief and misery.

“It is, however, not only a personal victory; it’s also a victory for many Nigerians in diaspora under similar conditions who are desirous to serve their country.

“Finally, client wishes to thank her family, friends, the legal team and numerous well-wishers for their love, care and concern throughout this difficult period. Client is pleased that, at last, the cause of justice has been served.”

It would be recalled that Adeosun resigned on allegations that her NYSC certificate was forged.

There are strong suspicions that events that forced her out of office were the handiwork of some powerful and highly placed forces who had an axe to grind with her.

Multiple legal sources said the allegation of forgery was mere hearsay and could not stand since the authorities did not carry out any formal investigation of the allegation and no charge was brought against her.