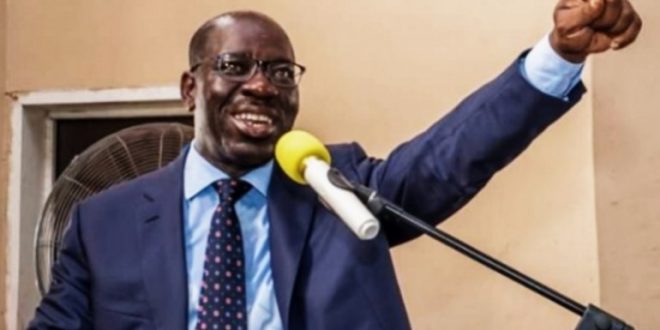 Gov. Obaseki was granted waiver by the PDP recently after he joined the opposition party from the All Progressives Congress (APC).

The suit was instituted by one of the governorship aspirants of the PDP, Omoregie Ogbeide-Ihama, who had vowed not to step down for Gov. Obaseki.

A major reason stated by Mr Ogbeide-Ihama was that Gov. Obaseki recently joined the party and only those who purchased the forms during the stipulated window should be allowed to participate in the primary election.

Mr Ogbeide-Ihama also prayed that the primaries be put on hold pending when the court would hear the motion on notice.

The judge, E. A Obile, however, did not grant that prayer. The judge asked that the motion seeking to bar Gov. Obaseki be served on the defendants including Gov. Obaseki via newspaper publication.

Recall, Gov. Obaseki joined the Peoples Democratic Party on Friday, June 19, 2020 after he was disqualified by his former party, APC, from seeking re-election allegedly for submitting questionable certificates.

Publisher and Editor in Chief - Magazine and Online Tel: 08038525526 - 08023339764 - 08055657329 Email: startrendinter@gmail.com
Previous Gov. Abiodun Appoints Ottun As New Head Of Service
Next NSCDC Frowns On Indiscriminate Use Of Its Insignias, Says COVID-19 Protocols Must Be Observed In Ogun