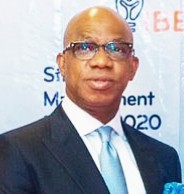 ABEOKUTA: Ogun State Governor, Prince Dapo Abiodun has said that the Coronavirus situation in the State is under control as the Italian, said to have contacted the disease, has fully recovered.

According to a press release e-signed and made available to StarTrend Int’l magazine & www.startrendinternational.com by Kunle Somorin, Chief Press Secretary to the Governor, Abiodun said that “the Italian is now in good condition and would be discharged soon”.

Prince Abiodun stated this when the management team of Lafarge PLC, led by its Country Chief Executive Officer, Mr. Khaleed El Dokani, paid him a courtesy call in his office at Oke-Mosan, Abeokuta.

The Governor said government would continue to regard the virus as a serious threat that deserves special attention, considering the State status as the nation’s industrial hub, with large number of  expertriates, noting that the State is looking at the possibility of setting up a Bio-security centre.

“For us, the virus is a serious one and an issue that is in the front burner. We will not lower our guard, particularly due to the fact that we have large number of industries and expertriates here. We are enjoying lot of supports from the World Health Organization and the National Centre for Disease Control. we are going ahead to prepare for the worst and hope for the best”,

He applauded the company for its prompt response by quarantining the first index case and the first sets of contacts, urging the company to sustain the level of attention given to the issue, just as he added, ” I hear the index patient is doing very well and will be discharged soon”.

Prince Abiodun, who acknowledged that the company has the first cement factory in the State, said Lafarge Africa PLC has contributed to the state’s economy in the area of employment and corporate social responsibility.

While lamenting the deplorable condition of some roads due to use of heavy duty trucks owned by major companies, the Goverrnor pleaded with company to look at ways of collaborating with State government in maintaining those roads.

“The failure of some of these roads, like the Abeokuta-Ifo-Lagos road, is due to heavy duty trucks. This road was not built to accommodate such trucks. Please look at the way you can collaborate with government in maintaining this road which is probably the second busiest in the country to alleviate the suffering of the people”, the Goverrnor pleaded.

Goverrnor Abiodun, who also explained steps taken to strengthen the private sector participation in the development of the State, said various agencies like the Investment and Facilitation Promotion, Business Environment Council and Public Private Partnership Office, have been put in place to serve as one Stop-Shop and ensure that agreements are in line with the global best practices.

Speaking earlier, Mr. Dokani said his company operates two factories located in Ewekoro and Sagamu, with a combined asset worth $1.3 billion and employing more than 500 people.

He said his company is looking at ways of providing affordable houses to the people in its areas of operation, just it has invested in a 50 Megawatts of powerplant at Ewekoro, capable of producing 90 Megawatts, out of which 40 Megawatts, would be available for the national grid.