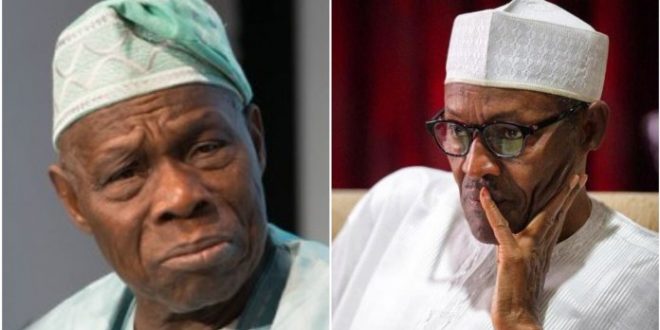 A call has gone to prominent Nigerian leaders to quickly intervene in the crisis between President Mohammadu Buhari and former President Olusegun Obasanjo in the interest and growth of Nigeria.

It would be recalled that before the just-concluded elections in the country there has been character assassination between former President Olusegun Obasanjo and President Mohammadu Buhari.

The call was made by the General Overseer and founder of Save and Serve International Ministries in Ibadan the Oyo state capital while speaking with journalists at the end of an interdenominational church programme.

According to him, the two leaders are God sent and prominent Nigerians should not allow the devil to cause distraction and enmity between them, stressing that, the interest of Nigeria should be of prominent importance to both of them.

“God has special interest in them and that is why they must not disappoint Nigerians. Both of them must know that Nigeria is greater than the two of them. They should not make politics of do-or-die affair” he posited.

Bishop Orire is of the opinion that we must see ourselves as one whether you are an Igbo man, Yoruba man or Hausa man, adding that we are all one Nigerian and that Nigeria is greater than anybody’s interest.

“Former President Olusegun Obasanjo is a respected leader and elder stateman. I will suggest that they should have immediate talk. They should meet privately and remind themselves how they suffered for this country to remain in unity and harmony. They should see Nigeria as one. There past labour to keep Nigeria as one should not be in vain.

“Also, the Generals like Abdulsalami, Babangida, Danjuma, Gowon should also have an indoor meeting with President Buhari because there is a general tension in the country. We should not use tribalism to destroy this nation,” Bishop Orire suggested.

Speaking on the forthcoming general election in the country, Bishop Orire advised politicians not to be involved in election rigging.

“The election must be free and fair because if the election is rigged, that means that they have silenced the voice of the masses.

He pleaded with the politicians not to involve the youths as political thugs stressing that the youths are the future leaders of this country.

“Youths should not allow themselves to be used by politicians because the politicians using them have their children abroad. They should not waste their lives for nothing.

On economy, Bishop Orire implored President Buhari to face the economy because fighting corruption alone is not enough.

“The government should look for a way to ease the tension in the country. If they want to dry the tears of Nigerians, let them reduce the price of petrol to N70. Things will change positively in all areas.

“All the money that have been recovered from looters should be put into the system. Politicians should tell Nigerians what they have for them instead of blaming one another. They should tell us what they can do for our nation. President Buhari has genuine plans for Nigeria but the people surrounding him are enemies of progress.

Bishop Orire, however, called on President Buhari to allow the embattled Chief Justice of the Federation, Walter Onnoghen to finish his tenure in office because Niger Deltans will not be happy if he is removed, adding that, he should be prosecuted after leaving office.